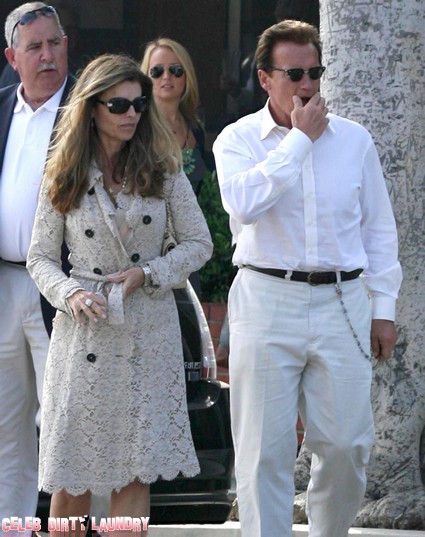 Arnold Schwarzenegger and Maria Shriver are trying to put their marriage back together and are reportedly attending marriage counselling sessions together. Can you imagine how desperate Arnold is to reconcile with Maria?  The Terminator meekly listening to some shrink tell him what a bastard he is for cheating on Maria with the maid. Love to have a bug in those sessions.

The former Governor of California is said to have initiated the sessions in a bid to reconcile with Maria after the pair split last year when she discovered he had fathered a child, who is now 14 years old, with their housekeeper Mildred Patty Baena. In fact it was the child’s face that clued Maria into the whole charade! Maria made the right choice when she filed for divorce from Arnold and nothing he says or does now should change her mind. Arnold is a true snake – a sociopathic megalomaniac who stops at nothing to achieve his goals.

A supposed friend told the New York Post:  “Arnold and Maria are having marriage counselling to work through their issues to get back together.  Maria is a devout Catholic and doesn’t believe in divorce, but is still struggling with the humiliation she endured by him.”

The 64-year-old Arnold has four children, Katherine, 22, Christina, 20, Patrick, 18 and 14-year-old Christopher, with Maria and is said to have been promising his estranged wife “the moon” as he is “desperate” to get her back.

Another supposed friend of the pair, who were married for 25 years, added:  “He is promising the moon and telling Maria he has completely changed his ways.  Maria’s friends are warning her to be careful, saying he’ll never change.”

“Arnold is desperate to win her back, mostly because he realises he can’t live without her, and partly because he doesn’t have the political clout without her.  Winning her back would be the best way to show the world he has been forgiven for his transgressions.”

Arnold and Maria were spotted furniture shopping in Santa Monica, Los Angeles Wednesday – probably looking for a cage for Arnold and earlier this year he was spotted wearing his wedding ring.

Do you think that Maria should take the snake back? Can a man who lied to his wife, his family and all of America for almost 2 decades ever be trusted? Let us know in the comments below.