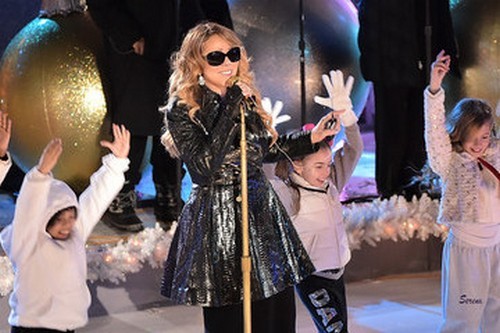 Whenever two people with extraordinary egos are combined – especially at a major entertainment venue – things are bound to start getting complicated. Mariah Carey and LeAnn Rimes might be on different spectrums of the talent and fame scales, but that doesn’t mean that their egos are any less sizable.

According to TMZ, Mariah Carey was scheduled to tape a performance on Tuesday night for the Christmas tree lighting ceremony at Rockefeller Center. However, Mariah turned up at the taping three hours late because she was too busy blabbing to her lawyer on the phone about divorce options. As we all know [even though they keep ‘officially’ denying it], Mariah Carey and Nick Cannon are getting divorced. Apparently, it just ‘slipped’ Mariah Carey’s mind that she was scheduled for a major taping that would be broadcast NATIONWIDE. But then again, this is Mariah Carey. Why are we shocked? To her, the world starts and stops at her whim. And this just proves it. TMZ states that even though NBC initially pulled the plug on Mariah’s performance after her late start on Tuesday, they have rescheduled her for tonight.

However, this also comes after LeAnn Rimes inevitably started a feud by tweeting that she would have more air time during the taping, all because of the ‘Mariah problem’. Ladies and gentlemen, let me introduce you to the prime shit-stirrer of Hollywood: D-list reality star and ‘singer’ LeAnn Rimes.

There’s no way Mariah Carey is taking this lying down. It’s one thing for anonymous blogs, websites, and sources to criticize her diva behavior, but it’s another thing for another well-known celebrity [however unwarranted] to criticize her in public like that. Plus, is LeAnn any better? She’s had similar diva meltdowns, so maybe she should really take another look at the pot calling the kettle black.

What do you guys think about LeAnn Rimes’ budding feud with Mariah Carey? Let us know your thoughts in the comments below.