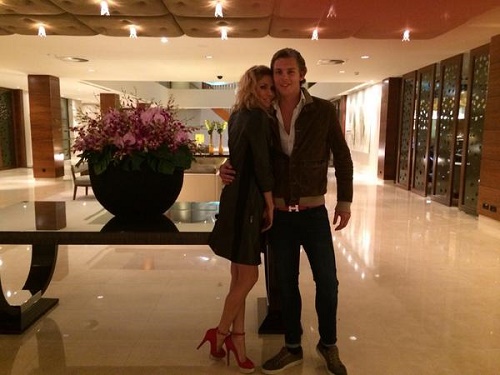 Apparently, Brandi Glanville of Real Housewives of Beverly Hills has found herself a 23-year-old boy toy to play around with. Supposedly, the reality star met her new blond haired BF while on a vacation in Amsterdam, and she’s smitten. She even posted a pic of them together on and captioned it “True love,” as one’s usually inclined to do after meeting someone for the first time.

Perhaps the 23-year-old guy’s reason for dating Brandi Glanville is to soak up a bit of fame, or maybe it really is true love. I suppose we’ll never know. But if it is a bit of fame this cutie is after, then he’s definitely latched onto the right housewife.

Brandi Glanville certainly is not being discreet about her new boyfriend and his child-like attributes, even likening him to her “third child.” She writes in her column for Australia’s New Weekly magazine, ” He’s 23, so it’s like having a third child.” But it’s okay if he acts like a child because he’s “so gorgeous, it’s stupid.”

“He’s clearly from a well-to-do family,” she continued. “Like, he paid the bills, he opened doors. Hey, I make friends wherever I go. Anything to get away from the drama.”

What do you think LeAnn Rimes and Eddie Cibrian think of Brandi’s new BF? Brandi is responsible for raising her children, alongside Eddie, and by extension, LeAnn. It’s no secret that LeAnn has been trying to overthrow Brandi and gain status as Top Mom in this awkward triangular feud — even if they aren’t her biological children. If Brandi continues to see this very young new boy, chances are LeAnn will use it against Brandi in an effort to say she’s immature and not focused on raising her kids.

What do you think about this situation? Let us know your thoughts in the comments section below!