LeAnn Rimes Breaks Down During Performance, Was Brandi Glanville Telling The Truth? 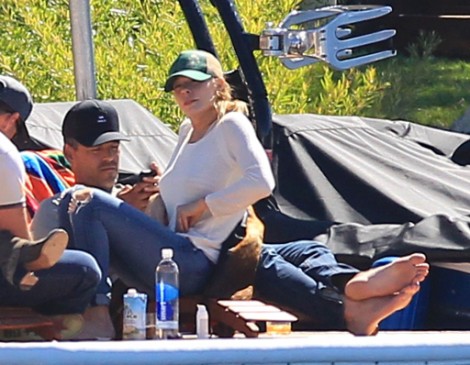 So who out there thought that LeAnn Rimes was taking the high road? Anyone? Because she has stayed pretty quiet over the last few days as Brandi Glanville ripped her a new one in the press. She let Eddie Cibrian do the dirty work and strike back even though it’s pretty obvious she practically wrote his responses for him and she went ahead with business as scheduled. I was a little impressed for a hot minute. But then came her latest performance and it became pretty obvious that LeAnn is not as immune to the confrontation as she would like us to believe.

On Wednesday night the country singer performed at the Civic Arts Plaza in Thousand Oaks and acted a little unstable and drunk. LeAnn Rimes even kicked off her shoes and plopped down on the rug on stage for the end of the show. I don’t have the pics but you can check them out here. Brandi’s got to be laughing her ass off right about now saying “I told you so! Biotch is crazy!”

It was pretty obvious Brandi was on LeAnn’s mind during the night. She needed her music in front of her to get through the songs and even mumbled to the audience: “Anybody ever been pissed off at some point and you just couldn’t get it out? And if you did, you actually might dig yourself a deeper hole, so you just let the other person dig themselves a hole?”

Hmmm… I wonder who she could be referring to?

So if LeAnn Rimes breaks down during performances and displays erratic behavior does that mean Brandi is right with her alcoholic/anorexic allegations or is LeAnn just suffering from the stress and humiliation the feud has caused? Can both be correct? LeAnn was cuckoo for cocoa puffs way before Brandi came along but Brandi definitely doesn’t help anything.