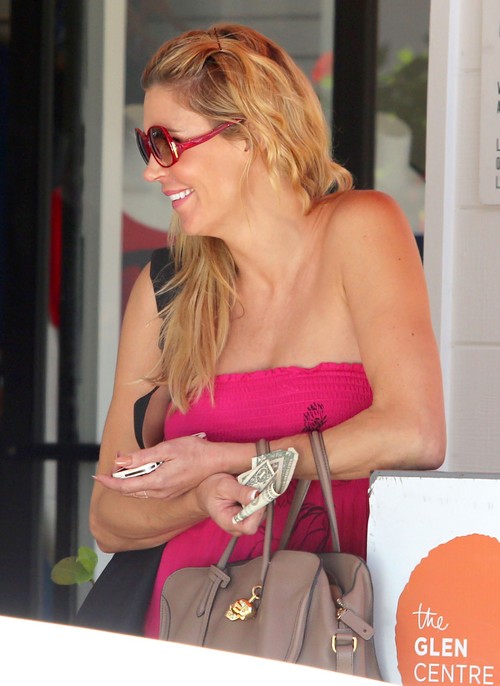 Real Housewives of Beverly Hills’ Kyle Richards attacked Brandi Glanville and the resulting brawl turned into an ugly fight. Another day, another violent brawl on The Real Housewives. This time, it was Brandi Glanville and Kyle Richards that decided to take their relationship to the next level, and by that, I mean they decided to set their fists knocking.

In Touch Weekly is reporting that Brandi and Kyle were exchanging some harsh barbs in early September, when they were still filming Season 5 of of The Real Housewives of Beverly Hills. However, things quickly turned dirty after Kyle overreacted to some of Brandi’s words, and well.. let’s just say, it quickly escalated into the kind of fight that the Real Housewives franchise has now become famous for.

A source explains, “Kyle and Kim [Richards, Kyle’s sister] got into a huge fight at a party. Brandi saw what was happening and went over to make sure Kim was OK. Kyle then went after Brandi and started yelling and getting in her face. Kyle pushed Brandi and scratched her arm!”

So basically, Brandi was actually trying to be a nice person for once in her life, and she ended up getting a scratched arm for her efforts? No wonder she doesn’t try to be better person if this is what happens every time she shows a bit of kindness! And following that thread, the constant feuds and fights on this franchise make a little more sense as well. Nobody fights for any good reason, but there are always those one or two housewives that just enjoy stirring people up for no reason. In this case, that person was clearly Kyle Richards. I mean, Brandi was just checking on Kim woman, take a chill pill. I get that Kyle didn’t want Brandi interfering, but pushing her and scratching her arm? Overboard much? Then again, I wouldn’t be surprised if she was told to play up her ‘feud’ with Brandi in a subtle manner, and in the eyes of those reality stars, I guess this is what passes for subtle.