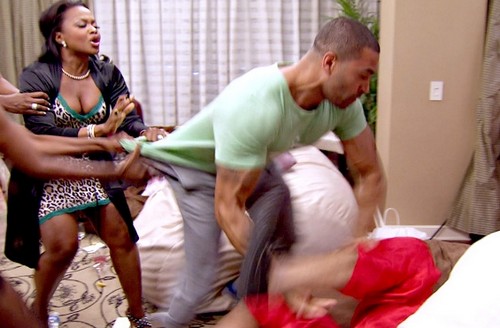 If your eyes were glued to the TV watching all the stars on The 56th Grammy Awards last night, then you probably missed Kenya Moore’s assistant Brandon DeShazer seeing stars after receiving a beat down by Phaedra Parks’ criminal enterprising hubby Apollo Nida on Real Housewives of Atlanta. Apollo has clearly served some time in jail before, because they don’t teach that kind of fighting at any gym or karate dojo. Kenya Moore’s comment to the Bravo cameras that “Apollo is out of his mind, beating Brandon as though he’s in his jail cell fighting for his virginity” was very fitting for the messy fight situation at the center of episode 13.

The evening started off with the promise of a good time. NeNe Leakes had arranged a “pillow talk” pajama party for the group that included all the housewives and their significant others or supplemental stand ins (Porsche Stewart brought her sister, Kenya Moore brought her assistant); also present was former NFL player Chuck Smith and his wife Mynique and former R&B singer Christopher Williams and his maybe wife Natalie. Everyone was lounging around in designer sleepwear on comfy pillows waiting to be prompted to answer questions prepared on cards and handed out to the participants.

At some point, the subject of Christopher Williams’s marriage in regards to Kenya Moore’s comments was brought up. This prompted both Kenya and Christopher out of their seats to engage in a heated discussion. During the course of this discussion, Brandon DeShazer jumped up out of his seat to protect Kenya once Christopher reached out to grab her. As the men began to scuffle, Cynthia Bailey’s husband Peter Thomas and Apollo Nida both got up to break up the fight as it ensued between Christopher and Brandon. Then all of a sudden, Apollo is beating Brandon pretty mercilessly as his wife screamed for him to stop. At one point you heard Phaedra reminding Apollo that they have two young sons at home.

Apollo Nida is having a very eventful 2014 thus far, and many viewers were probably shocked to witness the melee last night coming on the heels of Apollo’s recent trouble with the law. However, it is important to keep in mind that last night’s episode was actually filmed back in September of 2013 and note it in the proper place on the timeline to Apollo’s current legal woes. Interestingly, if one does take into account the time this scene was actually filmed, it may help explain Apollo’s peculiar violent response to a situation that had nothing to actually do with him or his wife. According to a copy of the actual complaint filed against Apollo that is circulating the internet, he was served with a warrant and had his car searched September 13, 2013 after being set up by his accomplice. The woman’s name is Gayla St. Julien and she had already been arrested, she was voluntarily cooperating with the feds to implicate Apollo. According to St. Julien, Apollo was the brains of the entire fraudulent operation and he was the one pocketing most of the money in this scheme, leaving St. Julien with nothing but “scraps” of money.

It isn’t difficult to imagine that Apollo had some inkling of an idea that his elaborate business dealings were being investigated by the authorities. It seems likely that he was under a lot of stress during the time that RHOA filmed that pajama party. It should be noted that before the fight broke out, Apollo was bragging about spending $5000-$8000 at the strip club. He boasted about coming home to put the receipt down on the table for Phaedra to see, something he could do because he was spending his own money and not his wife’s money. If you were wondering where that money came from if not from his wife, wonder no more.

Now we all know Apollo was thinking about prison talk and not pillow talk. It makes you wonder, since the dead can’t talk, was Phaedra planning on using her mortuary business to furnish her hubby with more identities to steal for his illegal business activities? Angela Stanton almost certainly has an opinion on that, if you are interested. Whatever the case, this is one big fat load full of dirty laundry. Help us wash it out in the comments below.