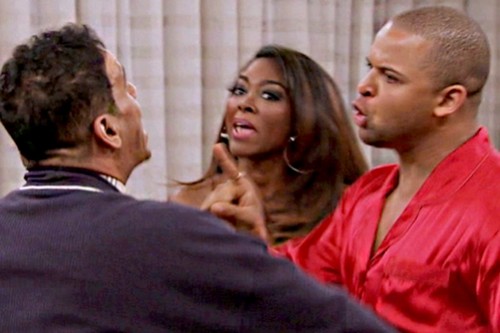 Tonight on Bravo THE REAL HOUSEWIVES OF ATLANTA continues and tonight’s episode is called, “Pillow Talk or Pillow Fight?” On tonight’s episode NeNe invites all of the couples to a sexy pajama party for a little pillow talk.  Did you watch last week’s season 6 episode 12? We did and if you want to get caught up before tonight’s episode, you can read our full and detailed recap, right here.

On last week’s episode after their blowup at Cynthia’s trunk show, NeNe visited Porsha in her new home to begin working on their friendship. Meanwhile, Kandi finds the perfect venue for her musical, forcing Todd to make a decision about his potential new job. As the ladies enjoyed a day trip to a local wine vineyard, things quickly turned from sweet to sour grapes.

On tonight’s show NeNe invites all of the couples to a sexy pajama party for a little pillow talk. However, the lighthearted frivolity turns into an unforgettable, all-out brawl, leaving relationships changed forever.

Tonight’s episode is going to be another drama packed one, which you won’t want to miss. So be sure to tune in for our live coverage of Bravos’ The Real Housewives of Atlanta Season 6 episode 13 – tonight at 8PM EST! While you wait for our recap, hit the comments and let us know how excited you are about the new episode of RHOA tonight.

Phaedra is throwing a party for her youngest son, Mr. President. Because of his nickname she wants a presidential inspired party with only the extravagance that Dwight can happily provide to one of her events. He’s planned all of the other important events for her older son and now the two are back together planning. They want presidential with a little bit of old Hollywood. Last thing they were talking about was having the secret service dance to Fred Astaire.

Cynthia has to talk to Peter. Not only did they get invited to Nene’s couple event but she has to tell him about the drama with Kandi. It was good news first with these two. Cynthia told her husband how Nene is planning a couples sleep over. And then she said how it might be awakward. She mentioned how her friend was getting read last week by Kandi over what she had said about Todd. Kandi at the time replied that she knew a lot about Peter that wasn’t relevant to his marriage to Cynthia. Cynthia felt she was alluding to something and despite Kandi denying she meant any offence; Cynthia still felt uncomfortable. Even Peter wants to know what Kandi meant. What stories did she supposedly hear?

Kenya went to her doctor. She wasn’t joking when she said she wanted to have a baby. Sadly, though she’s in for some bad news. The doctor told her she wouldn’t be able to get pregnant on her own. She would need assistance. And Kenya wants to continue. She wants a baby with her own DNA and feels if the doctors can’t help then God will.

She goes to the fertility clinic the next day. She wanted to get an idea of sperm donors and see what they’re like. Kenya actually ran into one young man out in the waiting area. He had funnily enough given her his id number in case she wanted to use his donation. Kenya seems to think she can find her perfect man in a donor. She blushes when she ran into one of the guys earlier and then when the doctors asked for a type she would like – she pulled out a list. A very long list that included her donor needed to be both funny and affectionate.

Kandi was having a production meeting. She, Todd, and her assistant were discussing casting. Kandi feels like Porsha would be a good choice. She’s not the greatest singer although with a little help from Kandi she could become better. Then she had to have a private conversation with Todd. Kandi told Todd what Christopher Williams’s “wife” said. Just a few seconds before Todd was thinking of hiring the man to be in Kandi’s play. Todd was offended because he usually dated normal everyday women before Kandi so how can he be a social climber? He has no idea where Natalie is coming from.

Kandi also told Todd about the sleepover at Nene’s. She wasn’t really feeling into group events but the fact she can go with Todd is what made her accept. She’s going to regret that later on.

Phaedra’s party for her son carried on without any hitch. There was a minor hiccup when Apollo didn’t want to really take part but other than that everything was fine. Because unlike Nene, Phaedra didn’t invite drama to her party. Nene however invited a slew of people that hate each other to one event. Her sleepover had Christopher Williams and his “wife” Natalie, Mynique and her husband, Phaedra and Apollo, Kandi and Todd, and Kenya! Even before the party began Cynthia was trying to warn Nene about her guest list and the hostess wasn’t having it. She pretended like nothing was going to go wrong at her party.

Nene’s party is supposed to couple counseling mixed in with some fun. She created a “fun” Q & A part of her event but the questions were simply made to start trouble. Phaedra felt Nene was creating problems and she was right.

Kenya arrived over an hour late and Nene was upset with her. They had a few words and then things just as the situation was dying down, Nene made sure to sick Natalie and Christopher on Kenya. She claimed she wanted to clear the air. She asked the newest couple to her party about how they felt and then when Christopher got up (after getting egged on by his “wife”) he started to try and go for Kenya. Kenya left her seat to go into Natalie’s face and Christopher grabbed her arm. Kenya’s friend, Brandon, came to her defense and a brawl started. Apollo and Peter were supposed to restrain Brandon when suddenly it turned into Brandon and Apollo fighting. They were eventually pulled apart but Apollo was fuming. And surprisingly so was Nene. She feels Kenya started the whole mess when she left her seat.

Things were beginning to settle when Apollo decided to attack Brandon again rather than leaving which is what his lawyer wife suggested.