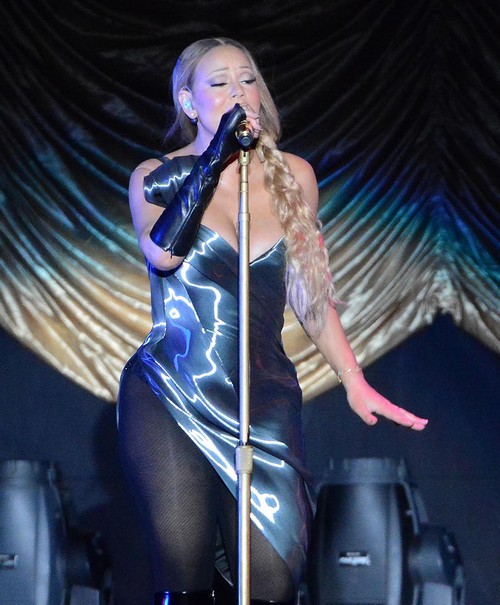 Mariah Carey and Nick Cannon might be pretending that everything’s fine for the sake of their kids, but people have seen enough fake Hollywood relationships to know the difference between a fake marriage and a real one. Rumors of a looming custody battle and an ugly divorce are what several sources close to the situation are predicting to CDL especially after Maria implicitly called Nick a cheating motherf***er during a recent concert. You can’t have a peaceful and happy divorce and custody settlement when on party is cursing out the other on stage and the other party can’t keep stop flaunting his girlfriends.

According to Nick Cannon, his children [4-year old twins Monroe and Moroccan Scott] don’t know that anything’s changed, even though their mommy and daddy are going through a contentious breakup. Nick stated on the Meredith Vieira Show, “They love mommy, they love daddy. Being the fact our situation, we have always been people who have been on the go coming and going, their life hasn’t changed one bit. We spend holidays together, we do everything that we are supposed to do together as a family.”

Right. I’m sure this family time involves Nick Cannon spending his free time ‘working’ with Amber Rose, or Mariah Carey being set up on dates by her rapper friends. Come on, how dense do they think their children are? The kids might only be 4 years old, and Nick and Mariah might actually be pretending everything is fine for their sake – but how long is that illusion going to last once Mariah and Nick start their divorce proceedings in court? And when Mariah and Nick start digging up dirt on each other to cheat each other out of money? Or how about when the custody battle begins, and Mariah and Nick start fighting over who gets full custody of the kids. You know Mariah Carey’s going to dig in her heels on that one, and she might even use Nick’s cheating to pull a fast one over his head.

Whatever the reason, I don’t see how Nick Cannon and Mariah Carey are going to maintain the status quo with their children. Sooner or later, they’re going to find out the truth, especially if Mariah and Nick stay on bad terms.