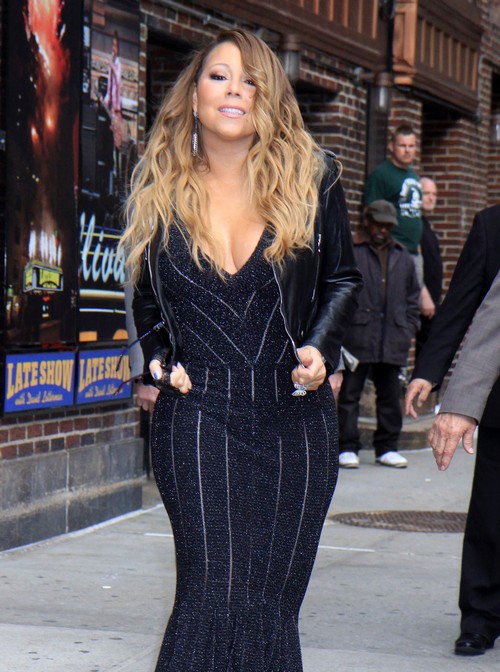 Those rumors about the divorce between of Mariah Carey and Nick Cannon have really picked up momentum in the last week. The couple has barely spent any time together in the last year and we’ve heard that Mariah insisted on not celebrating their 6th anniversary last week because she is ready to pull the plug on the marriage. When Mariah and Nick first got together he was always with her to support her as she promoted her latest endeavors but that is no longer the case. In fact Mariah is beginning to promote her new album Me. I Am Mariah…the Elusive Chanteause and she is doing it alone.

Mariah stopped by David Letterman’s show recently and while her cleavage was on full display her husband was missing. Before you jumped to the conclusion that he may have been in LA let me squash that for you. Nick was actually in Hartford, CT. at a school pretending to be principal for the day. NYC is a pretty quick train ride away so it was quite obviously a choice not to support his wife.

Off the record Mariah has reportedly said that Nick is a deadbeat dad and it looks like he is also not the most supportive husband either. Do you believe the rumors that Nick and Mariah are headed for divorce? I have to admit I’m seeing absolutely nothing to make me think that they are still together. Do you think that they are? Tell us your thoughts in the comments below!

Update: Here is what Nick had to say about all the rumors that he and Mariah are done: “You kind of have to ignore it because every week it’s something different, and if you paid attention to it, it actually probably would start really affecting you…There’s no merit or truth to it. It’s kind of humorous, really. It couldn’t be further off from the truth, and it really affects the credibility of the so-called newspapers.”

And here is an ILLUSTRATION of Mariah by creepy Terry Richardson – it isn’t a photo – it is a cartoon – ‘You. You are not Mariah’