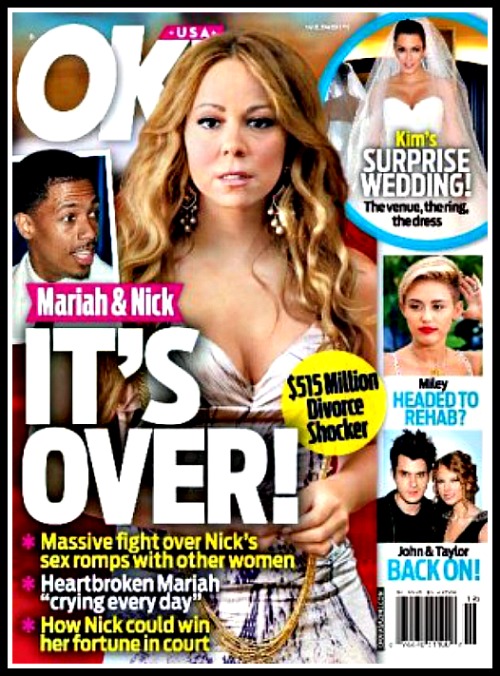 Uh-oh, I can already predict the calm before the storm if this report comes true. The love that made us all believe in true love – a.k.a. the marriage between Mariah Carey and Nick Cannon – might be falling apart. Never mind the fact that Mariah has consistently and publicly shown diva behavior, and that Nick has been rumored to be with hooking up with other women for the past few years. I guess that both of them stopped turning a blind eye to each other’s faults [about time, really] and have decided to go through with a divorce.

Again, this is a weekly tabloid report, so I would take all this with a grain of salt. However, OK! Magazine suggests that Mariah and Nick are embroiled in a $515 million divorce battle, following ‘massive fights over Nick’s sex romps with other women‘. Apparently, Mariah is heartbroken and crying every day, but even more so because Nick could walk away with half her fortune in court. You’d think that Mariah would put a no-cheating clause in her prenup, but to each their own, I suppose.

There’s also a report suggesting that Taylor Swift and John Mayer have gotten back together, which is extremely possible. Taylor has never rebounded with an ex-boyfriend before, but John’s notorious for hooking up with his exes, and we all know that Taylor can’t resist a [pretend] bad boy.

Also, is Miley Cyrus headed to rehab? Probably. One only needs to track her trajectory through the past few months to see the direction she’s headed in, and it ain’t a happy one. Perhaps rehab can put her back on track, although she’ll have to cancel her tour if she really wants any results.

Lastly, Kim Kardashian and Kanye West are trying to go through with a surprise wedding, and rumor has it that they’ll end up tying the knot by the end of this week. No doubt they’re trying to get the jump on the Cannes film festival – wouldn’t want anyone or anything stealing their thunder, would they?