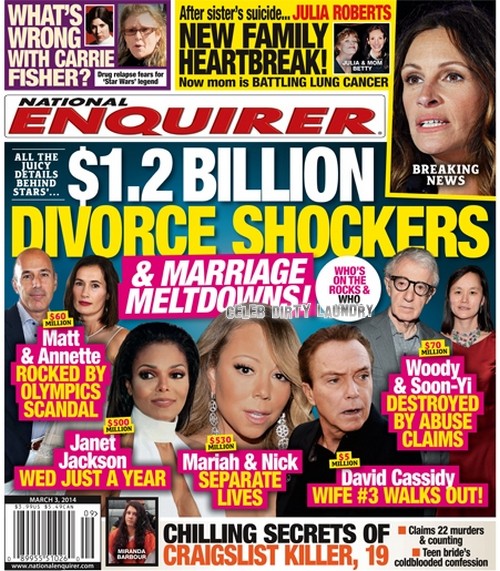 Celebrity couples breaking up? Color me shocked. The latest cover of the National Enquirer has a feature on all the celebrity couples that seem to be in trouble lately, and Nick Cannon and Mariah Carey lead that pack. Worth $530 million, their marriage seemed to be headed for a split when the former lovebirds started spending more time apart. Now, sources tell the Enquirer that they’re pretty much leading separate lives in private, despite their public image of a happily married couple. I have to say, I can’t blame Nick for leading a ‘separate’ life from Mariah – can you imagine living with her demands and diva behavior on a 24/7 basis? Yeah, exactly.

Other couples on the rocks are reportedly Woody Allen and Soon-Yi, who have been ‘destroyed’ by the abuse claims. Well, considering that their relationship ‘destroyed’ their family, it’s only fitting. Then, we have David Cassidy, whose third wife reportedly just walked out on him. Ouch.

There’s also Janet Jackson, who married just one year ago, albeit to a bazillionaire. If she gets divorced, you can bet that’ll be one heck of an expensive breakup.

Finally, we have Matt Lauer and his wife Annette, who’ve reportedly been ‘rocked by the Olympic scandal’. Eh, I don’t know if I’d call what’s happening with Matt and the Olympics a ‘scandal’ per say, especially not in comparison to most Hollywood scandals.

The Enquirer also alleges that Carrie Fisher is battling a drug relapse, which would be terrible if true. Fisher really seemed like she was back on track recently, and her career might be significantly rejuvenated by a new Star Wars gig – but that might not happen if this story is true.

There’s also a report on Julia Roberts and the death of her half-sister, Nancy Motes. The report claims that the family is facing another heartbreak in the form of her mother’s lung cancer diagnosis. I really hope the Enquirer’s making this up, because that would suck to have a mother diagnosed with cancer right after the death of your sister.