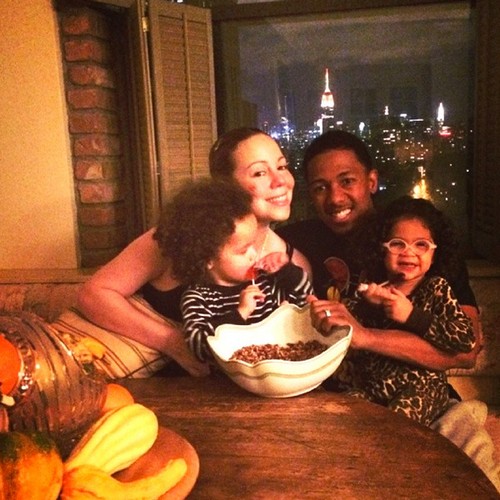 Nick Cannon and Kanye West are supposed to be ‘friends’, but it’s doubtful that it will stay that way after this latest bit of news. In a [probably drunk or inebriated] rant, Nick took to Twitter to criticize Kanye and his recent comments, pretty much calling Kanye out for his ridiculous ego and his penchant for calling himself a ‘genius’ all the time.  No doubt Mariah Carey feels the same way as her husband, after all, isn’t she the biggest genius and goddess alive?

Nick wrote, “I love @KanyeWest like a brother & been one of his biggest fans & friends since day 1, but Genius is eternal patience. @KanyeWest Real geniuses don’t have to tell everyone that they are a genius. Maybe I should’ve just called him and told him that in private. Oops, my bad! Twitter-stream-of-consciousness LOL. I just got online and saw all these @KanyeWest interviews and I was inspired to rant. Oh well, going back to Thanksgiving. We cookin’ son!”

Not only did he decide to publicly diss one his ‘friends’ using Twitter, but he felt the need to tweet Kanye in the comments as well. I mean, I don’t think anybody’s going to disagree with him on his thoughts, but it was probably not the smartest move for him. Kanye holds grudges for a long, long time and you can bet than Nick Cannon  has now been added to his list. And not only that, but I’m sure we can now expect an extended rant on Nick in Kanye’s next interview.

See, this is why Twitter is a hazard for celebrities. I guarantee that we’ll eventually see Nick delete all those Twitter comments or take them back in some way, but when you put something on the Internet, it will stay there forever. Think before you tweet should be the new celebrity mantra.