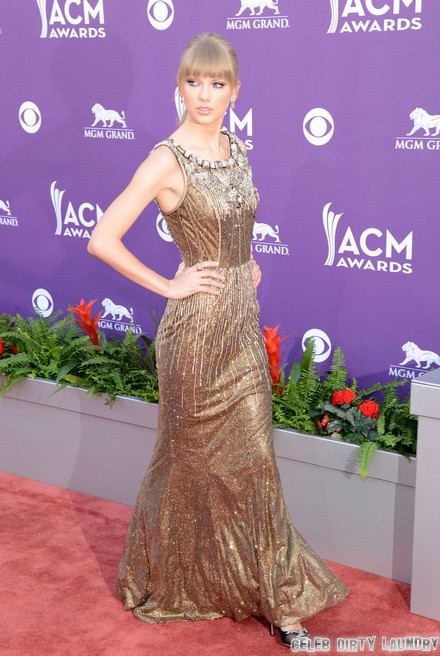 Taylor Swift cannot stand being upstaged. This much we know, after the incident with Kanye West and her amazing losing face at the Golden Globe Awards. The girl’s got a lot of talent, but she’s not the best at playing nice with people she doesn’t like. Now, US Weekly reports that Taylor went out of her way to make sure that she performed before her ex-boyfriend John Mayer at the ACM awards. You know, the same John Mayer that dumped our Swifty and broke her heart – allegedly.

According to US Weekly, Taylor ‘put on a stink’ when she found out that she ‘learned that John Mayer was slated to perform before her.’ Apparently, Taylor ‘said she had to go on earlier than him.’ You know, it’s interesting that Taylor thought going on before John would be a bad thing, because numerous studies have concluded that people tend to remember the last few acts more than the first few at a concert or awards show. Either way, our dear Swifty acted like a spoiled brat. So what else is new?

Of course, Swift’s rep denies the rumors, and says that Taylor went on first because that was the way it was scheduled. That’s more believable and probably true, but where’s the fun in that? Either way, even if it was scheduled that way, it was probably because event organizers made sure to reach out to Taylor and confirm that she was ok with the lineup. The ACM awards aren’t exactly the Grammys you know? There aren’t a significant number of major stars at the show, and Taylor was probably one of their biggest draws. Of course they would go out of their way to accommodate her. Regardless of why the lineup ended up that way, Taylor Swift went on before John Mayer and that’s all she wants you to remember.