BY Heather DiPietro on May 11, 2014 | Comments: one comment
Related : Bravo, Reality TV, Recap 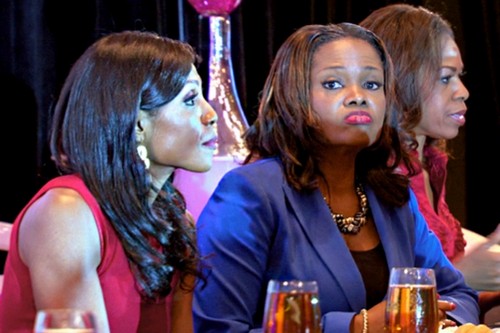 Tonight on Bravo Married to Medicine returns with an all new episode called, “Textual Healing.” On tonight’s episode, Accusations fly and tears are shed as a showdown between Mariah and Quad continues at a conference; Dr. Jackie is convinced to visit an adoption counselor; Lisa learns more about her health situation; and Quad tries to save her friendship with Mariah.

On last week’s episode Quad hired a new designer to help launch her puppy clothing line. Tensions flared at Lisa Nicole’s speaking event when Toya confronted Dr. Simone on her bad behavior. The fighting continued to spiral out of control as Quad and Mariah came face to face in an explosive showdown.  Did you watch last week’s episode?  If you missed it we have a full and detailed recap, right here for you.

On tonight’s episode the drama of the WEN Conference continues with more tears and accusations thrown out by Mariah and Quad. It’s the big day for Lisa as she finally finds out whether or not she’s cancer free. In a last ditch effort to save their friendship, Quad invites Mariah to an upcoming fashion show.

Tonight’s episode begins with the ladies still at the Wen conference. Lisa is so upset that this can ruin her conference as Mariah and Quad are arguing and Mariah decides she has enough and leaves. Mariah is going off on Quad, even calling her a roach. Quad is putting on the full waterworks-drama as she stays back and talks to Toya and the ladies. Mariah is upset, while Quad has the tissues and is crying and acting super emotional. Dr. Simone tries to make some headway with getting the two friends back together, or at least to act civilly to one another.

Moments later, Toya and Simone make amends and hug it out. Simone apologizes for treating Toya poorly for so long. She feels like she recognizes that she handled things badly and apologizes to Toya. Lisa has to keep things moving so after her attempts to get the women together fail, she moves on with her event. Dr. Jackie is a featured speaker and is up to speak soon. Heavenly is upset that she is not on the panel given all her experience. Moments after she shares her feelings with Lisa about being slighted, she just goes up to the stage anyway to join the panel that she was not invited to be a part of.

As Jackie begins her presentation, Quad returns to the event. Lisa gets caught off-guard but kindly introduces Heavenly. She actually gives a nice speech and pays compliments to Lisa. She raises a few eyebrows from the ladies after telling folks to “google her” at the end of her speech.

Simone and Jackie are talking about the Wen conference. Jackie tells Simone she needs to take her attitude down a notch. Simone brings up the subject of adoption again with Jackie but tells her she thinks she still is not fully committed or ready. Jackie says the time is right and she wants to convince Curtis of the same.

Lisa needs to get the kids ready so she can head out to her very important doctor’s appointment that she has been putting off. She is trying to hold it together knowing today could be life changing if she gets tragic news. Her tests today are very important and she cannot put them off any longer. Shortly after she finds that her cysts were benign and that she does not have cancer. Darren was there for support and they celebrate the good news. They share the great news with the kids when they get home.

Jackie meets with her patient Tiffany and checks and double-checks to make sure she does not want any more babies before they get into their discussion about birth control. She gives her all the options and again asks her if she is sure she won’t want a fifth child and she informs her she is SURE.

Jackie is getting ready to meet with the adoption counselor and Simone comes to be a part of the discussion. Curtis does not know about it yet, but Jackie wants to get all the details before even presenting her case to him. Courtney, their guest, comes and Jackie gives her her background and why she is adopting. Jackie is surprised about all the details involved and sees that the process is not as easy as she may have thought. They talk open adoption and Jackie shares how that scares her a bit and is very honest about her feelings. Jackie talks about her profession and how she sees births all the time but has yet to feel this connection. She asks Courtney if there is the same connection with an adopted child. Her next task…get Curtis on board.

Quad is looking at fabrics to get her new line off the ground. Rico is helping but making Quad put in some work herself hauling fabrics around. Quad tells him about the Wen conference and Rico shares his own dislike of Mariah. Rico is trying to stir up some trouble between the two by feeding Quad some dirt on Mariah that she didn’t know about her home, and by encouraging Quad to invite Mariah to a fashion show. Quad gets emotional again and puts some thought into a text to Mariah about the show. She is carefully trying to choose her words as Rico forces her to hit send. We’ll see if she replies.

Meet us here next week for another recap. Don’t forget to check out our interview with Married to Medicine’s top diva, Mariah Huq!