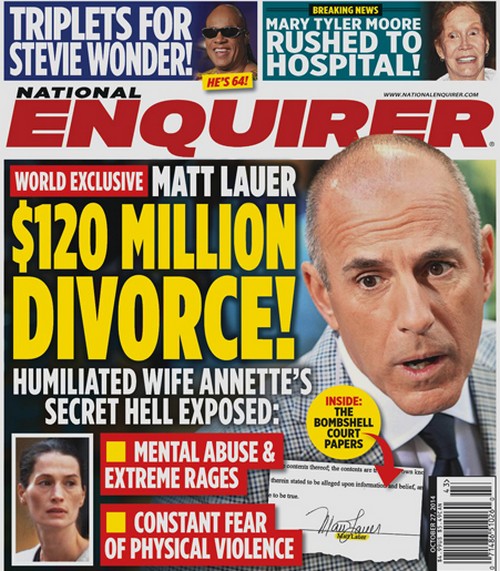 Everybody’s [not so] favorite news anchor, Matt Lauer, almost got a $120 million divorce from his wife, Annette Roque. The National Enquirer has reportedly acquired the divorce papers that Annette filed, and the details are quite shocking. Apparently, Annette Roque actually walked out on Matt Lauer for three months in the Spring of 2005. The files claim that Matt, “made certain extremely hurtful accusations against her, which ultimately turned out to be unfounded.”

So anyway, Annette left Matt for a few months, and that separation caused her ‘extreme distress‘. But when she came back home, she decided to file for divorce – while pregnant with their third child. The actual divorce documents were filed in September 2006, but they were sealed until now.

In simpler words, the Enquirer’s divorce files are bringing down Matt Lauer’s public image, which is that of genial and friendly family man. According to Matt’s ex-wife, he was anything but that. I know divorced couples aren’t necessarily on the best of terms, but it’s certainly relevant to note that Annette filed the divorce papers even though she was pregnant with their third child. Most couples – especially in Hollywood – tend to give their marriage another shot if they’re having another child, which is what I call the great baby whitewash. But Annette didn’t want to do that, which I take to mean that she was probably telling the truth – that Matt was emotionally manipulating her, among other things. However, the poor woman decided to stay with Matt Lauer in the end, which no doubt caused her a lot of grief. The guy’s been accused of cheating on her every chance he gets, most recently with his Today show co-host Savannah Guthrie.

In other Enquirer news, Stevie Wonder is reportedly having triplets at the ripe old age of 64, and Mary Tyler Moore has been rushed to the hospital as her health declines rapidly.