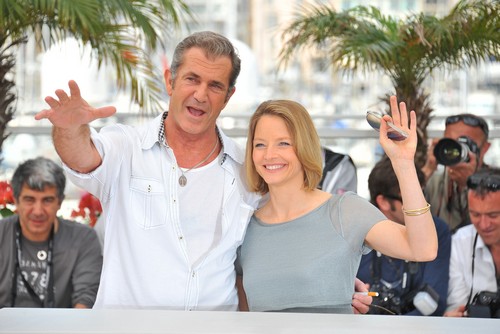 Alexandra Hedison married Jodie Foster not even a month ago but already she believes that she’s in a position to start pulling rank. We have already told you that Jodie seems to be fairly naïve when it comes to relationships and it’s usually her friend’s that need to point out obvious problems that those rose colored glasses prevent her from seeing. Everyone up to and including Ellen DeGeneres warned her about marrying Alexandra and I suspect she’s now starting to understand why.

According to the May 19th print edition of National Enquirer Alexandra isn’t at all comfortable with Jodie’s solid friendship with Mel Gibson. While many in Hollywood have shunned the aging actor Jodie has kind of gone above and beyond to help salvage his career. She publicly has spoken out in support of Mel and also cast him in a film that her production company was doing to try and pave the way for Hollywood to give him another chance.

Alexandra simply sees Mel as a bigot that deserves no place in their lives but Jodie is holding her ground on this one, probably because, as CDL first conjectured, Mel is the biological father of both of her sons. The fact that Mel may have given her the gift of motherhood means that he can do little wrong and he has a bond with Jodie that is unbreakable, even by her new wife.

Alexandra also worries that if Mel is around it’s more likely that the boys will eventually learn that he is their biological dad. She has enough competition with Cydney Bernard, Jodie’s ex who shares in the parenting and custodial responsibilities 50/50. Alexandra knows that if she fights against Jodie’s friendship with Cyd it may push her right back into her exes’ arms. Lashing out about Mel seems to be a much safer bet and it’s one that Alexandra is taking. Do you think that Jodie will actually push Mel out of her life or is it Alexandra that’ll go first? Tell us your thoughts in the comments below!