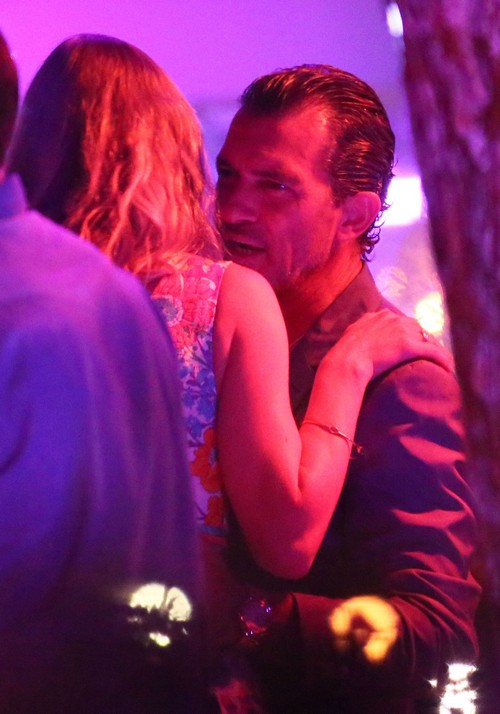 By now, everyone knows that Antonio Banderas was being unfaithful to Melanie Griffith. There’s already a large amount of evidence proving that, and now, we have yet another piece of confirmation. Melanie filed for divorce from Antonio at the beginning of June, but a new report alleges that Antonio was already hooking up with a ‘hot blonde banker‘ long before Melanie went for a legal separation.

Sources close to the former couple claim [via Radar Online] that Antonio was having an affair with this blonde, a banker named Nicole Kempel. Antonio and Nicole were spotted together in May at a party, and this was the woman that the tabloids kept linking Antonio to in Cannes. They’ve reportedly been spending all their time together since then, and word of their affair obviously got back to Melanie.

However, sources also add that Melanie’s divorce lawyer could make things very difficult for Antonio if he continues to flaunt his love for Nicole. For one thing, Melanie and Antonio had been married for more than 18 years, and their divorce was bound to get contentious. For another, their pre-nup is sure to include clauses concerning infidelity, and Melanie is bound to take advantage of that.

Sure, Melanie’s marriage to Antonio was falling apart long before Antonio met this woman, but most of their issues were rooted in Antonio being unfaithful – not just this time, but over and over again. It’s just that she finally got sick of it and decided to leave him, something that she probably should have done a long time ago. But now that she and Antonio are finalizing their divorce, Antonio feels like he’s free to move on. Will this banker woman last? I doubt it, but hey, at least he’s no longer cheating on his wife.