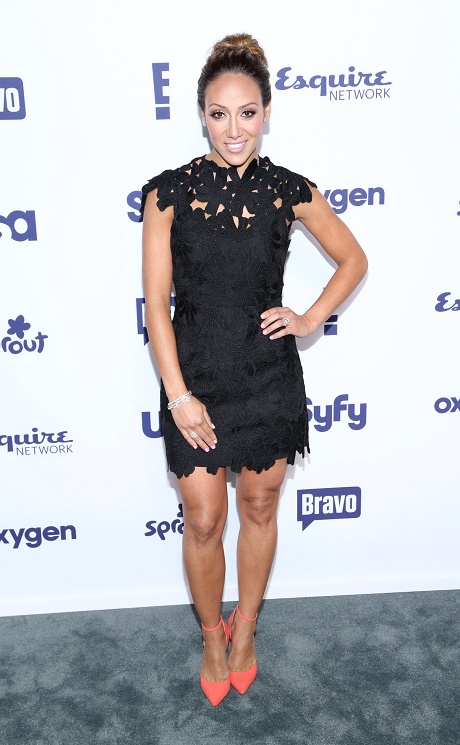 Teresa Giudice and Joe Giudice were sentenced to prison last week, and the Real Housewives of New Jersey has obviously jumped all over that by now. Recent reports confirmed that Bravo set it up in such a way that all the housewives would be able to give their reaction within days of hearing the sentence, and that’s exactly what’s happening. The networks know that Teresa’s and Joe’s drama is ratings gold, further evidenced by the fact that their Bravo interview drew north of 3 million viewers.

Now, different cast members are reacting in different ways, even though most of the reactions are undoubtedly scripted or pre-planned. In Melissa Gorga’s case, she claims that she’s ‘heartbroken’ over the sentences, adding, “Obviously this has been a very tough week. We are heartbroken for our family and especially those four sweet girls. Pray for them. No matter how you feel, I hope everyone is wishing their family strength and faith.”

Uh-huh. You know, I would believe her, except I have a hard time believing a single word out of any reality star’s mouth, especially one who’s proven so unreliable in the past. To be fair, Melissa is Teresa’s sister-in-law, so she HAS to be nice to Teresa and Joe. She also has to pretend to give a damn, even if she doesn’t actually give a damn.

NeNe Leakes was much less pretentious in her answer, and in fact, she was almost blunt in her statements concerning Teresa and Joe. She went the anti-Melissa way and told E! News last week, “I can’t really say how I would feel. Just thinking if that happened to me, I would be like ‘Oh my gosh, just nobody talk to me’ … I’m thinking I would be that way, but I don’t know?”

Basically, all the housewives and their husbands are pretending to be devastated over Teresa Giudice and Joe Giudice going to jail, but since they’ve had almost a week to prepare for any possible scenario, I wouldn’t believe a word out of any of them say.