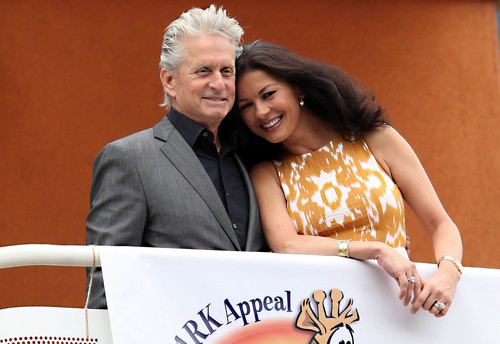 Usually when a high profile Hollywood couple splits and they confirm that they are taking time apart it’s code for divorce. It’s normally the first public step that a couple will take after they have already decided to pull the plug on their legal union. When Catherine Zeta-Jones and Michael Douglas confirmed that they were taking a break last summer it seemed as if the writing was on the wall. For several months though Michael would show up in various places and when asked he would talk about being hopeful that things can be fixed.

Late last year it was confirmed that the actor was showing up at the family’s apartment in NYC to make breakfast for the kids and to watch TV with them. Catherine and Michael also spent the holiday’s together leading to more speculation that a reconciliation was in the works. According to Page Six, Diana Douglas, Michael’s mother is now confirming that the couple has indeed patched things up for the greater good- a reconciliation.

According to Diana they are back together and she never doubted that they would work it all out. She also really likes Catherine and is supportive of the way that Catherine has handled her mental illness and other issues. Ironically, Michael at first kept his cancer battle from the family because he is extremely private. He only came clean and appeared to blame Catherine once his diagnosis went public. The couple has gotten through some heavy duty battles in recent years and now it looks like they are in a very good place. Did you expect Catherine and Michael to reconcile? Tell us your thoughts in the comments below!