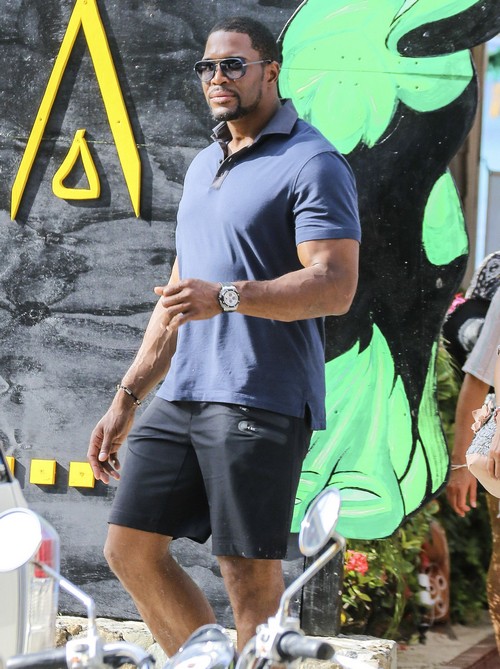 America’s #1 morning show is quickly falling apart and it looks like ABC execs are desperate to save “Good Morning America.” News unexpectedly broke earlier this week that GMA fav Josh Elliott would be leaving the show immediately to join NBC Sports and possibly GMA’s rival “The Today Show”. ABC announced Amy Robach as his replacement just minutes after reports of Josh’s departure leaked. However, Amy may not be Josh’s only replacement. Sources say that another sports commentator may also be filling Josh’s empty seat.

Football Hall of Famer/Super Bowl/Talk show host Michael Strahan is reportedly in talks to join GMA and an announcement could even be made today. Michael replaced Regis Philbin in 2012 to sit alongside Kelly Ripa and co-host the daytime talk show “Live with Kelly and Michael.” With the new duo, ratings surged and he was even nominated for a Daytime Emmy.

ABC has yet to make an official statement, but if he joins, Michael will also continue to host “Live” with Kelly. Michael would appear on GMA for various segments between 7 and 8:15 a.m. and then join Kelly at 9.

“He’s not being brought in to replace Josh. He’s not taking anyone’s spot,” a source told People magazine.

The 42-year-old may not be specifically replacing Josh but it is somewhat a slap in the face to the former SportsCenter co-host and future Sunday Night Football commentator. Josh’s broadcast background is in sports and now GMA is bringing in a Super Bowl champion and Emmy nominated talk show host.

GMA has beaten “The Today Show” in the ratings and remained number one for almost two years. The newfound success has been credited to the chemistry between the dream team lead by George Stephanopoulos and Robin Roberts, however, something is clearly going on behind the scenes.

Weatherman Sam Champion abruptly left the show in December to become the new face of The Weather Channel and now Josh. Josh reportedly left because “He wanted something that ABC couldn’t give him,” said a source close to the ABC negotiations. ABC reportedly offered him between 4-5 million year which he turned declined despite being a raise from his current $800,000 a year contract.

“In good faith, we worked hard to close a significant gap between our generous offer and his expectations. In the end, Josh felt he deserved a different deal and so he chose a new path,” ABC News president Ben Sherwood said in statement. “I want to thank Josh for his many contributions to GMA and ABC News. Later in the week, we will bid him farewell.”

But even this farewell may not happen. Josh was absent on Monday’s show and sources say ABC doesn’t quite know how to handle his exit since his moving to NBC. A greatest hits tape without him to watch it is even possible.