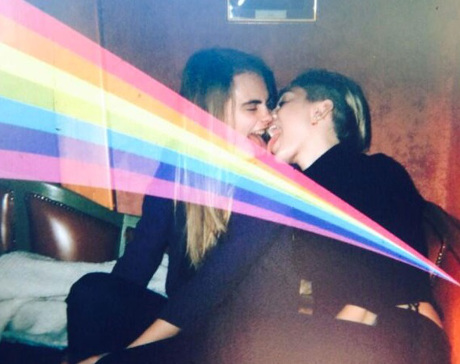 It’s impossible to forget about Cara Delevingne and Miley Cyrus’s hot make-out session on Instagram a few months ago. Frankly, the images of Miley licking Cara’s tongue are burned into our brains, and apparently we aren’t the only ones who can’t get past the hot pics. Cara’s rumored girlfriend, Michelle Rodriguez, can’t get over Cara and Miley’s make-out session either.

Michelle Rodriguez has a history of violence and drinking problems, which she battled from the years 2002 to 2009. After multiple DUI charges, court-ordered community service, 180 days in jail, and alcohol related counseling, Rodriguez appeared to have gotten herself together and was on the path to sobriety and clean living. And then she began hooking up with Cara Delevingne and everything went downhill again for the troubled actress. Cara and Michelle have been photographed together numerous times this year partying. At one point, Michelle had to be literally carried out by security to the couple’s car after a long night of partying.

So, what happened to Michelle Rodriguez? Why the sudden partying again? Ironically, Michelle’s drunken stupor all began after Cara and Miley’s picture of them making out went viral. The popular theory is that Michelle’s drinking away her sorrows and is still extremely hurt about Cara and Miley making a mockery of their relationship.

The troubled actress is head over heels in love and borderline obsessed with Delevingne. Rumor has it she’s convinced Cara is cheating on her with Miley. Michelle may just be a paranoid, insecure mess. But, she has reason to be so. How would you feel if your lover posted photos of her cheating with you on Instagram for the world to see and then claimed it was all for fun? Miley hasn’t exactly hidden the fact that she is into girls, and Cara is gorgeous. Why wouldn’t she be into her?

Do you think that Michelle Rodriguez is just being paranoid, or could there be some truth to the rumors that Cara is cheating on her with Miley?