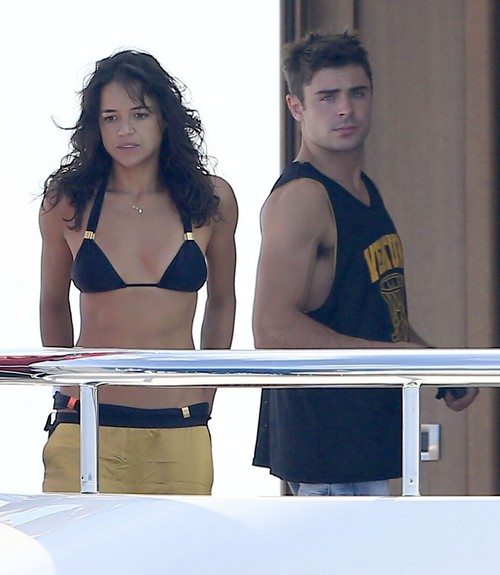 Michelle Rodriguez and Zac Efron had a very, VERY brief fling. They were both in Ibiza, they were both partying a lot, and naturally, they started spending more time together. They served as distractions for each other, not to mention party buddies – we already know that Michelle and Zac have a fondness for partying and drugs, and they’re both well known… let’s just say – junkies.

But reports this week claimed that Michelle and Zac had already broken up, which makes it one of the shortest relationships to ever exist in Hollywood – even by the industry’s already ridiculously low standards. However, a new report suggests that the main reason Michelle and Zac broke up is because Michelle was still not over Cara Delevingne.

Michelle and Cara dated for a few months, but they seemed to end their affair on amicable terms. But even though Michelle’s not showing any signs of visible distress, sources reveal that she’s still torn up over the end of their relationship, and that’s one of the reasons she even hooked up with Zac in the first place.

In Touch’s source explained, “Cara was always being mentioned. Cara would spend time on the boat and Cara and Michelle have all the same friends. It was just a lot. It was always, ‘Cara, Cara, Cara.’”

Yeah, Zac was obviously just a brief rebound for Michelle as she was recovering from her breakup with Cara. We suspected that Cara had dumped Michelle when they broke up, and it would explain why Michelle can’t seem to get over her. And being in Ibiza and partying all the time, Zac was available for her to take her mind off Cara. But as everybody who’s been in a serious relationship knows, rebounds don’t always work – and in this case, it doesn’t look like Zac served as enough of a distraction for Michelle.