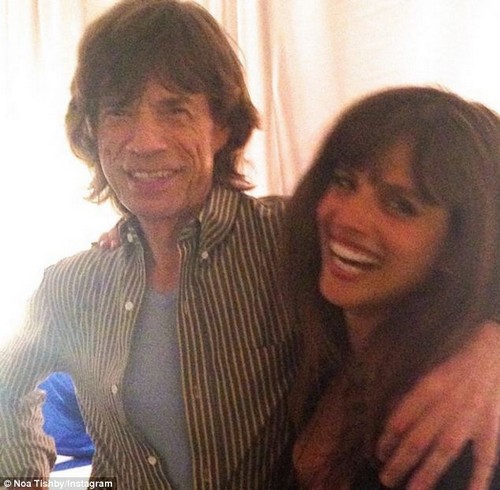 It’s been three months since L’Wren Scott committed suicide, but Mick Jagger has already moved on. Mick was photographed getting touchy with a young mystery brunette in Zurich last weekend, and many people are [rightly] criticizing the fact that it’s not even been three months since his longtime girlfriend died and he’s already hooking up with random young women. Mick was also caught in the pic above with model Noa Tishby in Tel Aviv – the old dog gets around.

L’Wren’s sister issued a statement after the pictures were published, saying, “And people wonder why L’Wren was so depressed? His daughter says that he is still heartbroken and so devastated about losing my sister. And then you see these photos he will never change.”

I think we can give L’Wren’s own sister credit for knowing how her sister felt, but that certainly doesn’t cast Mick in a good light, does it? There were several rumors suggesting that Mick’s infidelity and unhappiness with their relationship was what led Wren to committing suicide. But that being said, that’s a pretty brutal responsibility to live with for the rest of your life, and I can’t blame Mick for trying to run away from his grief. However, you’d think that he’d have a little bit more respect than hooking up with 20-somethings just months after his girlfriend’s suicide, no? Respect to her family, to her friends, and to her memory? But no, there’s no excuse for this.

Of course, Mick’s friends are already jumping to his defense and claiming that Mick is ‘drowning his sorrows in women‘ as opposed to alcohol or drugs. Um, sure. Forget the fact that most people who lose their significant others to suicide would be curled up in a ball somewhere. I’m sure Mick’s excuse for his womanizing ways is because he’s dealing with his grief. Sure. And I suppose that’s also meant to excuse his behavior before L’Wren’s death as well? Ugh, rock stars.