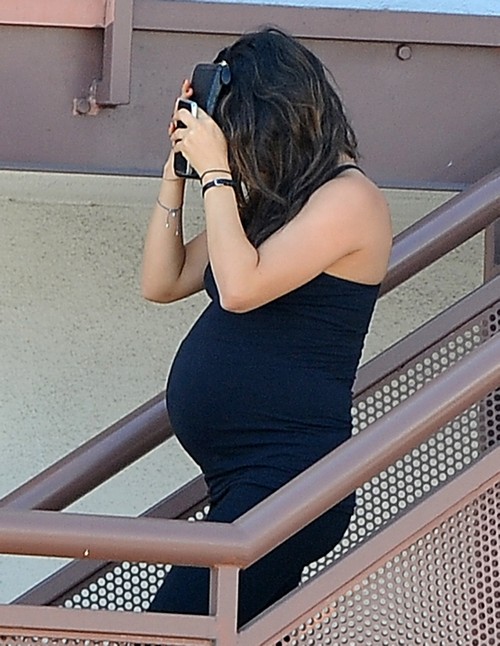 Mila Kunis is getting ready to give birth any day now as she gets closer and closer to the end of her pregnancy and un-named sources say it will be a home birth. New reports claim that Mila is intent on giving a natural birth at home, with minimum medical intervention. She’s also reportedly interested in having Ashton Kutcher‘s sister-in-law as her doula, with Ashton present by her side throughout the home birth.

Gossip Cop already laughed off the report, but what do they know? It’s not like this rumor is coming out of nowhere, even if it is coming from a tabloid [Life & Style Magazine]. Many stories that wind up proving to be 100% true start out life as gossip on tabloids. Mila was the one who expressed interest in having a natural birth way back in May, telling Ellen Degeneres on her show, “We looked into the like the midwife aspect of it and things and spoke to my OB/GYN and realized that the hospital that I’m going to be laboring in does a midwife, you know, doula type of thing, and so I’m gonna do it as all natural as I possibly can unless that there’s an emergency or something that should wrong.”

Sure, she does indicate that she was still planning a hospital birth just in case something went wrong. However, there’s not a huge difference between having a natural birth in a hospital with a midwife, and having a natural birth at home with a midwife. Sure, the risks are less in a hospital, especially if something goes wrong. But millions of women have been doing natural births throughout the centuries, and they’ve managed it just fine. Plus, I doubt Ashton Kutcher would let his future wife-to-be and baby mama do a natural home birth if he thought she was going to put herself at risk. Not to mention that when you have the resources of Ashton and Mila you can easily have competent medical help at home waiting in the wings just in case there are unexpected complications.