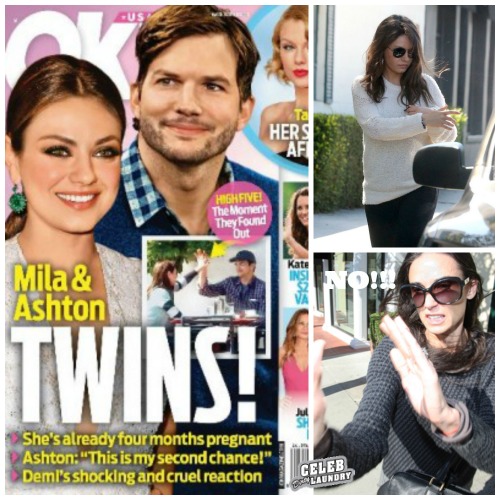 The celebrity rumor mill has been trying to pin a pregnancy on Mila Kunis and Ashton Kutcher for years now, but this one might just actually stick. On March 14th Mila was photographed out to lunch and shopping in Los Angeles, and reignited old pregnancy rumors, looking much fuller and “puffier” than usual.

OK! Magazine is now stating that not only is Mila Kunis pregnant with Ashton Kutcher’s baby, she is pregnant with two of his babies. Twins! According to this week’s issue of OK! Magazine Kunis and Kutcher were seen celebrating the pregnancy during an intimate lunch, and high-fiving each other the news of twins.

A friend of Ashton and Mila also told the magazine that the celebrity couple is overjoyed by the idea of twins, and they are “up to the challenge.” The shocking news of Mila’s pregnancy has solidified Ashton and Mila’s relationship, and they are more in love and committed to each other than they ever were before. Hence, the reason they recently confirmed their upcoming wedding.

It looks like the That 70’s Show lovebirds are finally getting their happy ending. Ashton and Demi’s messy divorce is officially behind them, Mila has been flashing her ginormous engagement ring, and now they have not one-but two little bundles of joy on the way. Once can only imagine the severity of the break-down Demi will have when she sees the cover of OK! Magazine.

Do you think there is any truth behind the rumors that Mila Kunis is pregnant with twins? Do you think they she will walk down the aisle pregnant, or put their wedding on hold until after she gives birth?

Update – Mila is pregnant according to E! News – but not with twins. We will update as this news becomes official