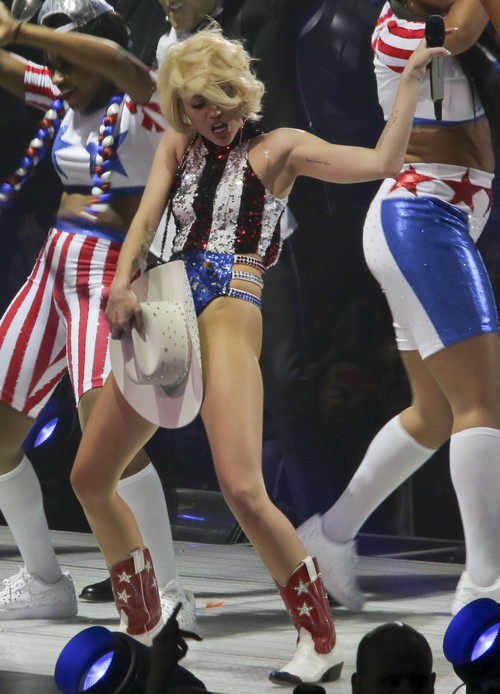 Miley Cyrus cancelled her concert at Charlotte, North Carolina last night, April 7th, because she was too sick with ‘flu.’ It was a last minute cancellation, but I’m thinking that if she was really ‘too sick‘ to perform, she would have known about it hours in advance, no? You don’t wait until the very last second to cancel if you know you’re not going to be able to perform.

However, it also doesn’t seem like a coincidence that it’s just days after Miley’s dog died. Perhaps she thought that she would be feeling up to performing, but she just wasn’t in good spirits. Of course, fans who have paid hundreds of dollars for a ticket will not accept that as a good reason, so there comes the handy ‘too sick’ excuse. Of course the ticket-holders will get their refunds. Still it’s awfully inconsiderate to wait until 30 minutes before showtime to announce the cancellation.

Miley’s rep told TMZ a half hour before the concert that she had the flu, but somehow, her concert today in Raleigh is scheduled to ahead. If Miley really has the ‘flu’, there’s no way she would recover in one day. Unless it’s some miracle flu that only lasts one day and has minimal effect on the body, there’s just no possible way for Miley to recover that quickly AND be able to perform the next day.

No, it’s much more likely that Miley just drank too much and/or took too much dope and just wasn’t in a state to attend the concert. She could have been drinking and drugging a little more than normal lately due to her dog’s untimely death, or she just could have been partying as per usual. Either way, she might have gone overboard and been too hungover and stoned to perform. But again, that excuse would never work with the event organizers and fans, so the ‘flu’ it was. This isn’t the first time singers have used that excuse for being too hungover, and it won’t be the last.