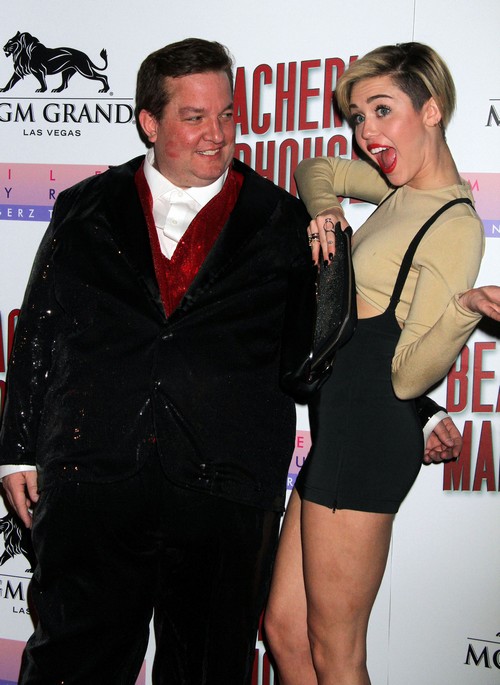 The latest issue of Life & Style Magazine claims that Miley Cyrus is terrified that her ‘secret life’ will be revealed to the public. The report claims, “When the cameras are off, the star’s behavior is wilder and more intense than her public persona.”

Jeez, how much wilder can she get? She’s making out with different people in public every night, she’s grinding on other dancers while performing, she’s open about taking drugs, she goes nude in every other music video and photoshoot, and she parties all the time. I’m not sure how anything would be ‘wilder’ or ‘more intense’ than that?

Anyway, Life & Style’s source claims that Miley’s worried that one of her new ‘friends’ will sell her out to the tabloids, explaining, “Engaging in bad behavior in front of people the way Miley does is like playing Russian roulette. It’s just a matter of time before one of her so-called friends attempts to sell her out. There’s no shortage of would-be authors in the star’s posse. If one of her confidantes decided to tell all, he or she could reveal the dirty little secrets Miley wants so desperately to keep hidden from her fans.”

Well, this part rings true. I don’t think Miley’s worried about it, per say, but there are definitely a lot of new people in her friend circle that wouldn’t hesitate to sell her out. But I still think that’s a bit late, no? There are strategic ‘sources’ that keep talking to the tabloids, and we all know these sources are people who hang out with Miley at parties and are looking to make a quick buck. So no, I don’t think Miley’s worried about her ‘secret life’ being revealed, although she really should be more careful about the friends she makes. I would say she should also tone down her behavior, but there’s no way that’s going to happen any time soon.