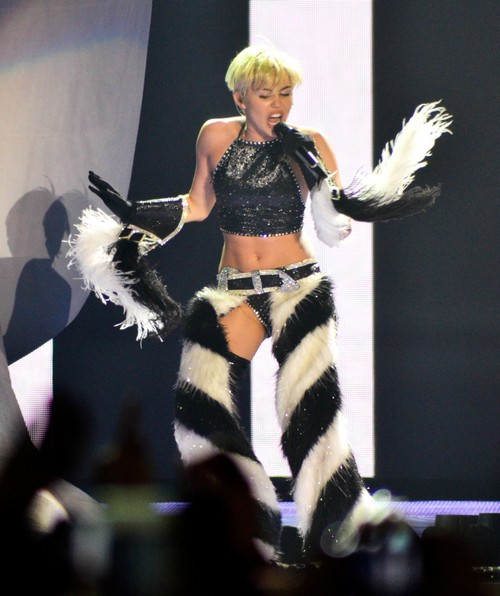 Miley Cyrus has always been a bit on the eccentric side, but lately her behavior is borderline insanity. After Miley finished up her scandalous Bangerz tour in Europe, the pop sensation headed home in June, and hasn’t left the house since. Miley hasn’t been seen or photographed at any social engagements since she returned home. Apparently she has been too busy crafting.

According to the August 18th edition of OK! Magazine, “Once the European leg of her tour ended on June 22nd, the singer immediately holed up at home, devoting her entire hiatus to creating bizarre art projects.” Cyrus’s social media accounts which were once full of risqué pictures of Miley partying with other celebs and drinking and smoking weed, are now plastered with pictures of her latest creations, like hair ties she made herself and her own DIY sleep mask.

A source told OK! Magazine that, “Miley has always been social, rarely spending any time at her house. But during her time off she barely left! She’s been ignoring friends and family who have reached out to her, which has them concerned.” OK!’s source blames Miley’s new hermit status on her new BFF’s Wayne Coyne (of the band The Flaming Lips) and his girlfriend Katy. Apparently, ever since Miley started hanging out with Wayne and Katy she has been obsessed with all things psychedelic and spends every waking hour in her house with the couple crafting.

Everyone has ranted about Miley and her wild partying habits for years now, and it seems like she is finally calming down. But, apparently being a crazy hermit craft lady is way more concerning than dancing on a life-size hot-dog nearly naked. What do you think of the new Miley Cyrus? Has she gone off the deep end, or is she just finally mellowing out? Sound off in the comments below!