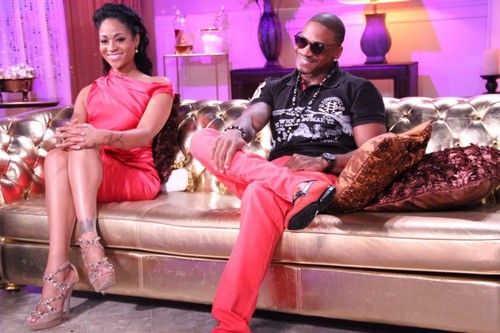 The Love & Hip Hip Atlanta drama surrounding Mimi Faust and Nikko Smith never stops, does it? The two have already raised a ton of controversy surrounding their sex tape, and now, Mimi has just learned that Nikko was actually married while they had their fling.

During the August 11th episode of Love & Hip Hop Atlanta, Mimi learned that Nikko was married, cheating and had a wife during their affair. Mimi spoke to Hollywood Life about her feeling of betrayal, explaining, “It definitely was a deal breaker… For two years even everything that happened with the sex tape for him to not tell me [he was married] was an absolute deal breaker.”

Uh, yeah…. how did his wife not come forward after seeing that sex tape, is my question. Did Nikko and his wife have an open marriage? Or is Mimi just faking the extent of the drama to get more publicity for the show?

She claims that she suspected that Nikko was lying to her, adding, “I suspected something, she would call, I’d be like who is she and he’d say ‘oh she’s my ex.’ I have no idea [why she didn’t tell me] I tried when I found out [to reach her].”

She adds that she and cheating Nikko haven’t spoken in two months, and that there’s no way she’s ever getting back together with him. I don’t know if I believe her, considering how easily these reality stars get back together when the need suits them. Right now, Mimi feels ‘betrayed’ that Nikko had a wife, but this little betrayal’s also garnered her a whole new set of eyeballs. Plus, it’s hard to believe that she would be so gullible, especially after their sex tape ordeal.

Do you guys believe her when she says she didn’t know about Nikko’s wife? Let us know your thoughts in the comments below.