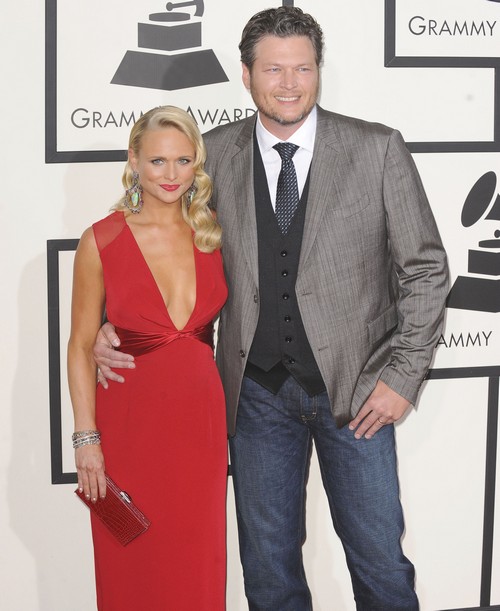 Miranda Lambert looks amazing after her 35-pound weight loss, but is it enough to keep hubby Blake Shelton’s eyes on her, and hands off all the ladies? Miranda, 30, had an incentive for her recent weight loss and sexy new style; she wanted to ensure hard-partying country singer Blake, her husband since May 2011, only has eyes for her. She felt like the excitement was gone from their relationship, which began as an adulterous affair while Blake was still married. Miranda knows Blake is a merciless flirt. The flirting, coupled with excessive drinking can easily lead him down the wrong path since ladies constantly throw themselves at him and are happy to bed the country heartthrob.

Blake, 37, freely admits to using booze as a mechanism for getting through each day. He is so proud of his drunken escapes, that he is often tweeting inappropriate comments, flirting with girls online, or just simply embarrassing Miranda. She is tired of having to smile through the barrage of rumors her hubby’s infidelity, because she knows firsthand that the likelihood that the gossip is a reality is very high.

Blake uses drinking as his crutch and tries to dismiss any wrongdoings by simply stating that he doesn’t remember what he’s said or done. That drove Miranda absolutely crazy. She is still bitter and worked hard to lose the weight so she could show Blake that she still has what it takes to be the sexy singer he once fell for. Miranda decided the timing was perfect as Blake is planning a tour that includes 23 concerts, beginning in June of this year. She cannot watch him as closely when he is gone, so she wanted to look hot before his focus shifted to his tour. Now, she feels, she’s given him something to think about while they are apart, as Miranda herself has an upcoming tour of her own.

Eager to squash any divorce rumors, the two certainly put on the PDA at a pre-Grammy party in Los Angeles and continue to pretend through Twitter and their reps that all is fine in their happy home. Not so much, say those who know the couple best. Between the heavy drinking, the jealousy, the rumors, and the time apart from one another, the country couple doesn’t seem to stand a chance. Miranda dropped a couple of dress sizes recently, so how long do you think it will take for her to drop the biggest weight on her back of all… about 205 lbs of drunken mess