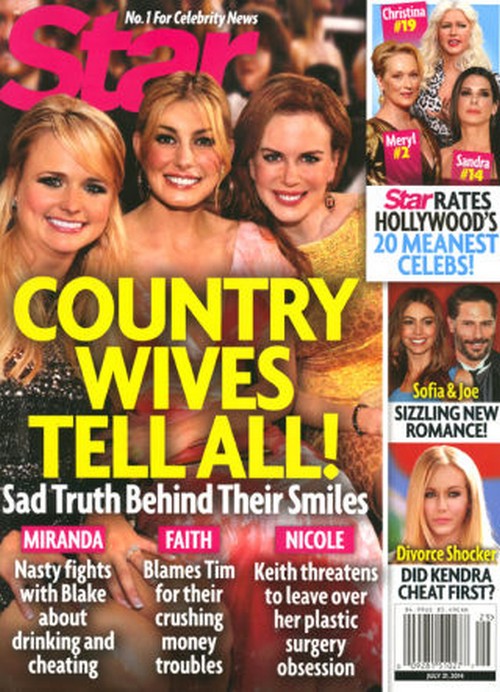 When Miranda Lambert finally files for divorce from Blake Shelton I don’t think very many people are going to be surprised. The couple’s three-year union has been plagued with problems because of his wandering eye and heavy boozing. Instead of growing together Blake and Miranda are definitely growing apart, especially with her new found health kick. Their down time used to revolve around food and getting drunk. Miranda’s whipped herself into shape and refuses to party with her man now. Blake used to at least pretend to love coming home and instead he now freely admits that they have nothing in common.

According to the July 21st print edition of Star Magazine, Miranda is trying everything under the sun before throwing in the towel and so she has enlisted the help of Faith Hill. Miranda thinks that Faith is the only one who truly understands what her life is like because she too, has been part of a country super couple. Faith claims that the only way she was able to get her husband, Tim McGraw to quit drinking was by issuing an ultimatum. Up until now Miranda has been afraid to do that because she fears that Blake will walk away before going to rehab. In fact, he has said as much.

So for now, whenever things with Blake explode Faith is at least lending an ear to help support Miranda through the mess. Do you think that she will ever be brave enough to issue that ultimatum and then stick to it? I’m betting that Blake thinks he has her wrapped around his finger and that she’ll put up with anything. Do you think that he’s right? Tell us your thoughts in the comments below!