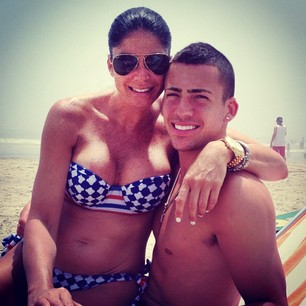 Mob Wives New Blood star Alicia DiMichele may have resigned from the popular reality show, but she is a long ways away from redeeming herself and winning over the people of Philly. DiMichele was met with a lot of backlash since her stint on Mob Wives, coupled with her open criminal case, it really is no wonder that she threw in the towel went on her way. Just because she has cut ties with the VH1 reality series, doesn’t mean people will be warming up to her anytime soon.

Sources close to the ex Mob Wives star have revealed to CDL exclusively that just because Alicia has quit the show, doesn’t mean she is living anywhere near a typical life. Apparently the other Moms at her son Carlo’s school are outraged with the latest uproar DiMichele caused at the elementary school. Behind her back the parents at Carlo’s school have already sarcastically nickname her “Mother Of The Year,” and Alicia just keeps giving them more ammunition.

Our sources tell us that last week Alicia sent Carlo to school to do a presentation in front of his class and their parents with a t-shirt on labeling himself a “BAD ASS.” One of Carlo’s fellow students went home and told his parents about Carlo’s shirt, which lead to an onslaught of phone calls from parents complaining to the school about his tasteless wardrobe.

DiMichele constantly reminded Mob Wives viewers that she was completely innocent an unaware of her husband Eddie Garafalo’s embezzlement and mob activities. She insisted that she wasn’t a part of “that life.” Correct me if I’m wrong but doesn’t encouraging your child to wear a shirt proclaiming he is “BAD ASS” encourage him to become a part of “that life?”