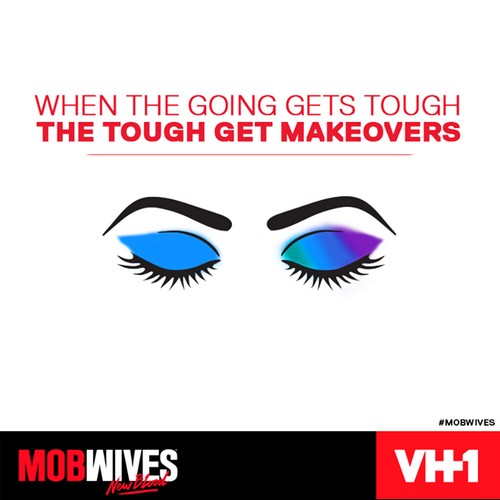 Tonight on VH1 their docu-soap series MOB WIVES continues with an all new Wednesday December 10, season 5 episode 2 called “Drunken Monkey Business,” and we have your weekly recap below. On tonight’s episode Drita D’Avanzo decides to meet with Renee Graziano to address their issues, but Drita’s anger is shifted toward Natalie upon hearing new information. Meanwhile, Renee deals with her son’s reckless behavior.

On the last episode gossip and lies spread and emotions ran high on Staten Island in the Season 5 premiere. Did you watch the last episode? If you missed it, we have a full and detailed recap right here for you.

On tonight’s episode as per the VH1 synopsis, “Drita wants to work out her issues with Renee; Drita’s anger shifts toward Natalie.”

Tonight’s episode is going to be another drama packed one, which you won’t want to miss. So be sure to tune in for our live coverage of VH1′s Mob Wives season 5 episode 2 at 10PM EST! While you wait for our recap, hit the comments and let us know how excited you are about the new episode of Mob Wives tonight.

Karen Gravano has moved back to New York. Her boyfriend missed her, her friends missed her, and her daughter wants to experience life in the city. So now was the perfect time to move back. Particularly, with a feud going on.

Renee denies spreading tales about big Ang and Drita. And in fact she’s more than a little insulted that some of her oldest friends are choosing to believe Natalie over her. Natalie is the new girl. No one knows her people and Karen for one doesn’t like the way she’s infiltrated their scene.

Plus, Karen has personal a grudge against Natalie. They got into a fight over social media and later Karen’s boyfriend had taken Natalie boyfriend aside to tell him to “check your girl”. But Natalie and London had taken what he said as a threat. So they accused Karen and Storm of threatening their lives.

Though London doesn’t seem to be all that concerned about it. He actually doesn’t want his girlfriend to go looking for trouble so he warned her to stay out of the drama. She on the other hand thinks she could handle herself. Because you know she’s Sicilian and all of that. So she told him to stay out of it.

Yet no one else appears to be staying out of it. Drita and Renee met up to talk things out and Drita heard some things that made her doubt Natalie. Renee told Drita about the fight between Karen and Natalie. And she warned Drita not to attack Natalie if she does decide to believe Natalie is lying.

Especially as Natalie is allegedly a “cop-caller”. When Drita , Karen, and Big Ang talked things over later on – Karen told them all about what had happened between her and Natalie. And she also had proof to back up some of her claims.

For instance, Karen showed the girls when Natalie suddenly started to talk bad about Karen’s father. Natalie was at first talking about Renee but then she dragged Renee’s family history into things. And discussing someone’s family is considered low blow. No one likes it when a fight goes there.

And more importantly no one likes a “cop-caller”. Karen said Natalie had threatened to call the cops and get an order of protection against her and Storm.

Karen knows that Big Ang and Drita are friends with Natalie. So she told them she won’t make a fuss about them all hanging out. But she also said that if Natalie ever brought up her family again then she was going to rip into her.

Big Ang is throwing an anniversary party and she’s everyone (minus Renee) and their respective men. And while Ang hasn’t voiced any doubts about Natalie – Drita is going to use the party to see how Natalie reacts when she’s face to face with Karen. Because Natalie tends to have a lot to say when Karen isn’t near her.

She told Drita that she wasn’t the one that started all these problems with Karen. Then she turns around and told Ang at Ang’s own party that if the family has a rat then everyone is a rat.

Ang tried to warn her about what she was doing but Natalie was all mouth. She refused to stop talking about Karen’s father and she didn’t care that the older and more experienced ladies were trying to divert a blood bath. Her mouth was like Drita’s fists – it’s like it had a mind of its own at times.

Though Natalie at least had the good sense to scuttle away (that’s how Karen described it) when Karen and her boyfriend did finally show up at the party. She went outside to smoke and that left her boyfriend London inside alone. So he chose to approach Karen and Storm. The three of them talked about what happened and they managed to settle the issue. Storm said they weren’t going to do anything and in exchange he told London that it’s best if people stop talking about other people they don’t know.

And that’s what Natalie heard when she walked in. She took what Storm said to be an insult and she asked London to man up. She wanted him to have her back and he told her to calm down.

But Natalie didn’t want to calm down. She wanted to go talk to Storm. She said she was going to put him in his place seeing as London wasn’t man enough to do it. And Drita and Ang thankfully stopped her from confronting him.

Don’t approach a man like you’re a man. There’s a rule about that and the ladies told Natalie to just have a one on one with Karen. That way they could maybe work everything out.

Yet Natalie didn’t want to do that. According to her, she doesn’t befriends rats or children of rats. So she kept going off and when she did see Karen – she called her a rat to her face. And that’s what started the fight they were always heading towards!