Mob Wives Recap “The Realest B… Is Back”: Season 5 Episode 1 Premiere 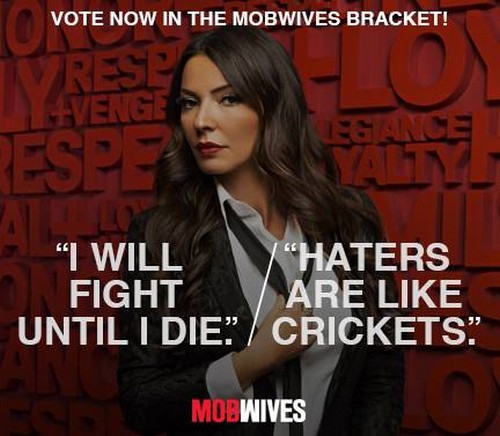 Tonight on VH1 their docu-soap series MOB WIVES continues with an all new Wednesday December 3, Season 5 episode 1 premiere episode called “The Realest B… Is Back,” and we have your weekly recap below. On tonight’s episode Gossip, lies and misunderstandings run rampant in Staten Island.

On the last episode hosted by Sherri Shepherd. Drita, Renee, Ang, Alicia, and Natalie sat down for an explosive, often funny and shockingly intense look back at the past season. Drita got angry with Renee for having talked about Lee with Karen Gravano back in the day. Did you watch the last episode? If you missed it, we have a full and detailed recap right here for you.

On tonight’s episode as per the VH1 synopsis, “gossip and lies spread and emotions run high on Staten Island in the Season 5 premiere.”

Tonight’s episode is going to be another drama packed one, which you won’t want to miss. So be sure to tune in for our live coverage of VH1′s Mob Wives Season 5 premiere at 10PM EST! While you wait for our recap, hit the comments and let us know how excited you are about the new episode of Mob Wives tonight.

Life on Staten Island has gotten pretty ugly with all the rumors flying around. It seems Renee has been throwing everyone under the bus over the summer. So much so Big Ange, her longtime friend, can’t even stand up for her this time.

Apparently, Renee has spoken to others about both Drita and Big Ange’s family. And once word got back to the other ladies – sometimes through Drita’s own clients – they started favoring Natalie. They find Natalie to be easier to deal with and she doesn’t come with the same amount baggage that Renee does. So they’ve chosen to give their former friend the cold shoulder.

A cold shoulder is not the same as ending a friendship but Renee is taking it that way. She heard her friends were hanging out with Natalie and that was like a slap in the face to her. It felt like they had chosen a side and it wasn’t hers.

Then, and to make things worse, Natalie wound up stirring up trouble. She was hanging out with Drita and Ange and everyone was having a good time until she opened her mouth. Natalie had admitted to the girls that Renee had told her a while back that Drita and her husband were rats.

So of course that ticked Drita off to no end. Drita’s temper is infamous and as soon as she heard what Renee had called her – she immediately began talking about pulling teeth. However Ange wasn’t as focused on Renee as she was on Natalie. Ange called Natalie out on her behavior. She told Natalie that she was now being a rat and she said she didn’t like how the other woman was stirring things up just when they should be calming down. Natalie had definitely crossed a line in her book.

And Ange isn’t the only one Natalie has upset. Renee had flown out to Arizona to see Karen and while she was there the two women got to talking. It seems that a few words exchanged over the internet between Karen and Natalie had Natalie so scared she tried to get an order of protection. She claimed Karen had put out a hit on her. And that couldn’t be further from the truth.

Karen told Renee that she was merely exchanging insults in an Instagram fight but if she really wanted to hurt Natalie then she go and do it in person. Natalie has targeted her. She’s called Karen names and has even brought up Karen’s family. Which is a big no no!

Renee eventually left Arizona and returned to the city in time to attend the annual summer party. But this time around she’s not going with Ange and Drita like she usually does. The others had preferred Natalie. Yet Renee decided she wasn’t going to let a little thing like that bother her.

She was tired of being run out and she was just going to have fun. And to her surprise the ladies all kept their distance from each other.

Drita, Ange, and Natalie were on one side and Renee was on the other. But you could feel the tension. Drita was smoking up a storm because she was so angry. What Renee had said about her was the straw that broke the camel’s back. Her husband Lee has just come out of jail and she’s been under an extreme case of stress ever since.

As for Ange, she’s in a good place with her family and normally she would have shared her excitement over her upcoming grandchild with Renee. Yet things changed and now everyone is just brimming with anger. Ange wanted Renee to approach her to apologize. And Renee wanted Ange to be the one to apologize. So nothing was going to get done and Natalie, being herself, chose to be the one to go over to Renee.

At first, she tried to ask Renee why she was sitting way over there. And rather than answer that very pointed question Renee chose to leave. But then second thought about that. So she changed her mind and stayed. And it’s lucky that she did.

Karen it seems wanted to surprise her so she came to the party right when Renee needed her. And when Karen had taken a page out of Natalie’s book by going over to the other group to say hi – Natalie practically flew out of the building.

Natalie was so upset Karen had showed up that she left the party early and quickly went home. Which, in case it needed to be said, Karen considered a victory!