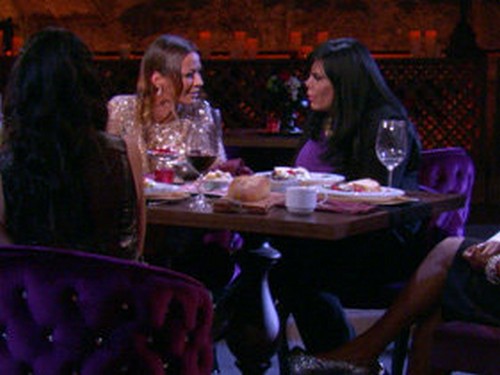 Tonight on VH1 their docu-soap series MOB WIVES continues with an all new episode.  On tonight’s episode it is the reunion show.  The ladies reunite to discuss the dramas of Season 4. Sherri Shepherd hosts. Did you watch last week’s finale episode?  We did and we recapped it right here for you.

On last week’s episode Renee confessed that she’s penning a sex novel, then planned a release party. Meanwhile, Alicia appeared before a judge. At the party for Renee’s book launch, Natalie performed the song “Delicious” for the whole crowd.

On tonight’s episode hosted by Sherri Shepherd. Drita, Renee, Ang, Alicia, and Natalie sit down for an explosive, often funny and shockingly intense look back at the past season.  Drita gets angry with Renee for having talked about Lee with Karen Gravano back in the day.

Tonight’s episode is going to be another drama packed one, which you won’t want to miss. So be sure to tune in for our live coverage of VH1′s Mob Wives Season 4 Reunion at 10PM EST! While you wait for our recap, hit the comments and let us know how excited you are about the new episode of Mob Wives tonight.

Tonight Sherry Shepard sits down with the Mob Wives: New Blood cast for their Season 4 Reunion. Alicia DiMichele reveals that her court date has been postponed again, so she still hasn’t been sentenced, which is why she is able to make it to the reunion.

First Sherry addressed all of the drama that newcomer Natalie Guicero brought to Mob Wives: New Blood this season. Renee Graziano confesses that in the beginning she did consider Natalie her “mini me.” Until the “Delicious” fiasco, that is. Renee still insists that is “rude to call your man Delicious.” Natalie still thinks she didn’t do anything wrong. Renee declares she is “done with the word delicious, and it is the end of the conversation.”

So, they move on and discuss their vacation to Las Vegas. Renee confesses that she relapsed on the way to Las Vegas, and that is why she was such a mess during the trip. Natalie calls Renee out and says that she was drinking way before they went to Vegas. Renee tells Natalie not to talk about her recovery and asks Natalie if she gave a shit about her recovery then why was she getting high WITH her?! According to Renee, Natalie gave her cocaine.

Renee confesses that she is ashamed of herself for putting her hands on Natalie in Las Vegas, and she is sorry that she was so messed up that things went that far. Renee says she “is sick of this,” having to watch the videos of herself in Las Vegas, she thinks it is humiliating. And, Renee is hurt that while she was going over the deep end her in Las Vegas her friends were laughing and joking about it behind her back.

Next Sherry brings up Drita’s relationship with husband Lee D’Avanzo, and Drita says they are the happiest they have ever been. A lot of viewers had a problem with the way that Lee spoke to Drita on the phone, but according to Drita she calls him just as many names and that’s just how their marriage is.

Sherry brings up the Mob Wives’ Twitter drama this season. Natalie called Renee out on Twitter and said that Renee “was a coke whore” and all she “wanted was attention.” Natalie explains that she was just defending Alicia, because Renee was subtweeting about her. Renee doesn’t care what Natalie says to her, she is upset that her 19 year old son is the one that read it on Twitter, and brought it to her attention. No teenager should have to read that his Mom is a “coke whore on Twitter.”

Next Sherry asks Renee about her sex book “Playing With Fire.” Renee says that it is about her life, but there is a lot of fiction as well. It will be released on April 8th, 2014.

Alicia’s sentencing is the next topic on the Mob Wives reunion’s agenda. There still hasn’t been a date set for her sentencing, and as of right now she still has no idea whether or not she is going to prison. She claims that she had no idea her husband Eddie was involved in the Mob, she was madly in love with him and believed whatever he told her.

Renee has been friends with Alicia’s husband “all her life.” But, that didn’t stop Alicia from accusing her of leaking stories about her. Alicia claims she was “hearing a lot of hearsay” and there were “a lot of outside sources” working against them. Alicia thinks it is ridiculous that Carla and Renee met on television and sat down and discussed her relationship with Eddie. Renee begins to deny it, but Drita begins screaming over her. Apparently hanging out with her friends’ husbands’ ex-girlfriends is Renee’s MO, and she did it to Drita during Seasons 2-4 with Karen.

Sherry asks Alicia if her brother Anthony is single, Alicia says he is single “so bring it on,” and she adds that his credit score is good.

Sherry and the Mob Wives cheers to their latest renewal, Mob Wives: New Blood Season 5, and call it a night.