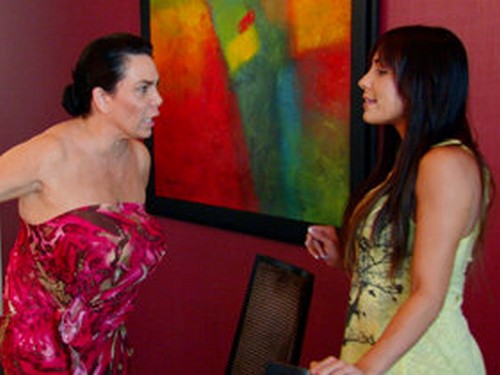 Tonight on VH1 their docu-soap series MOB WIVES continues with an all new episode.  On tonight’s show called, “Vegas — Part 2,” a Las Vegas getaway begins with the ladies trying to settle differences between Natalie and Renee. Elsewhere, Drita heads to the casino.  Did you watch last week’s episode?  We did and we recapped it right here for you.

On last week’s episode the New York girls dealt with the fallout from their “girls’ night out” and the growing tensions between Renee and Natalie. Meanwhile, Drita’s new domestic life wasn’t quite as blissful as she imagined. Alicia participated in Philadelphia Fashion Week in an effort to promote her boutiques–the only thing keeping her from financial ruin after her assets were frozen when she was arrested. With everyone under such stress, the women decided a getaway to Las Vegas was the perfect remedy for all their troubles. While they hoped that a trip to fabulous Sin City woukdl force a much needed reconciliation between Renee and Natalie, they couldn’t have been more wrong.

On tonight’s episode the girls start their first morning in Las Vegas trying to get Natalie and Renee to reconcile their issues. However, Renee has very little room for forgiveness. The conversation between Natalie and Renee quickly escalates into a shouting match and ultimately turns physical–more than once. The other three girls are forced to take turns hanging out with Renee and Natalie separately, secretly hoping to find a way to get them to resolve their issues before someone gets hurt. Amidst all the tension, Drita heads down to the casino to try and win back some of the thousands of dollars she lost her first unlucky night at the tables. When Renee finally reaches out to Natalie and is rebuffed, it not only threatens to further ruin their trip, but also changes the group forever.

Tonight’s episode is going to be another drama packed one, which you won’t want to miss. So be sure to tune in for our live coverage of VH1′s Mob Wives Season 4 Episode 5 at 10PM EST! While you wait for our recap, hit the comments and let us know how excited you are about the new episode of Mob Wives tonight.

Tonight’s episode of Mob Wives picks up where we left off last week, Drita, Alicia, Renee, and Big Ang are all in Vegas with Renee’s nemesis Natalie.  At the breakfast table Drita, Alicia, and Ang are trying to talk Renee about how crazy she was acting the night before.  Drita decides to go get Natalie, she thinks she should be at the table and be hearing what Renee has to say about her.

Renee jumps right in, and starts trying to educate Natalie on what the word “delicious” means.  Natalie snaps on Renee, and the pair get into a screaming match.  Renee gets physical and smashes the dishes on the table, and threatens to drown Natalie.  Renee is obviously not in the right mind and she can’t be reasoned with.  Natalie isn’t making matters any better by provoking her and pointing out how crazy she is acting.

Natalie tells Renee to “stick her tacky Mob Candy up her ass,” and Alice, Ang, and Drita stand back and watch in awe as all hell breaks loose.  Renee attacks Natalie from behind and tries to choke her, and the camera crew has to get involved and separate the pair.

Five minutes later Renee returns to the hotel room for Round #2.  Ang tries to be the voice of reason and points out that Natalie apologized numerous times.  Renee tries to attack Natalie again, and the crew drags her out of the room.

Renee, Drita, and Alicia are impressed with how Natalie handled herself.  They know they have to do something because Renee is not going to let go of her grudge with Natalie.

Natalie heads up to her room to call her boyfriend London, and fill him in on all of the drama.  Natalie is officially done with Renee, there is no friendship left or business partnership as far as she is concerned.

Drita, Alicia, and Ang head out to the pool together to get away from Natalie and Renee and their drama.  Alicia is upset that they took it so far over breakfast, this is not the type of atmosphere she is usually in.

Ang decides to head upstairs and check on Renee.  She is passed out in bed and Ang decides to leave her alone, since she has been awake for four days straight.  Ang feels bad for her, because she has relapsed and started abusing prescription drugs again.  She hopes that Renee can get back “on the wagon.”

Natalie is down at the bar drinking by herself, and Drita joins her.  Drita wants to try to fix the problem between Natalie and Renee before it turns into World War 3.  Natalie confesses that in the beginning of Mob Candy Renee took her under her wing, and this is a whole new crazy side of her.  Natalie agrees to be “cordial and nice” the rest of the vacation, and she says she actually feels a “little bad” for Renee because she knows she is “f—-d up.”  Drita has a new found respect for Natalie, she didn’t expect her to be so mature about this whole situation.

The next day Renee is up and about, she realizes that she was a hot mess yesterday and she took way too many Xanax and drank too much.  She still isn’t happy with Natalie though.  Ang convinces her to join the rest of them on a trip to Mob Attraction, an interactive mob museum.  Natalie doesn’t accompany them, and Renee is actually smiling and having a good time.  Alicia is excited to see her “clear and level-headed again.”

At the museum Renee takes Drita aside and wants to talk about Natalie.  Drita defends Natalie, and tries to convince her to “move past it.”  Renee is annoyed that Drita seems to be taking Natalie’s side over hers.

They head back to the casino and Drita hits the black-jack table, and loses even more of her money.  She “gives up” and heads back upstairs with her friends.

Natalie, Ang, Alicia, and Drita head out to the pool while Renee takes a nap.  While they are sitting at the pool, Natalie receives a phone call from Renee.  Renee wants her to come upstairs and talk to her one on one.  Natalie tells Renee she isn’t coming upstairs to talk to her because she doesn’t want to “get into it right now” and she’s not “ready to hug it out.”  Drita, Ang, and Alicia are not happy with Natalie.  They want her to go make amends with Renee.

Renee is fuming, the battle lines are drawn…again.  She can’t believe that Natalie turned down her invitation to “talk it out.”

She declares war on Natalie, she’s “either with her or against her.”