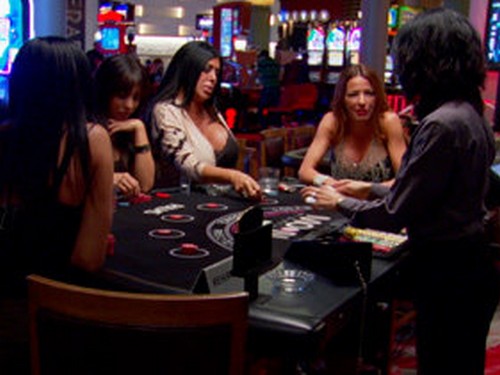 Tonight on VH1 their docu-soap series MOB WIVES continues with an all new episode.  On tonight’s show called, “Vegas — Part 1,” while in Las Vegas, Natalie, Alicia, Big Ang, and Drita hit the casino while Renee stays in her room.

Mob Wives is a docu-soap that follows the lives of four struggling, “allegedly” associated women who have to pick up the pieces and carry on after their husbands or fathers do time for Mob-related activities. The women are long time friends who live in New York City’s “forgotten borough”, Staten Island. Along the way they battle their friends, families and each other as they try to do what’s best for themselves and their children. It’s not easy to maintain the lifestyle they were accustomed to when the family’s primary bread winner is in lock up.

On tonight’s show the New York girls deal with the fallout from their “girls’ night out” and the growing tensions between Renee and Natalie. Meanwhile, Drita’s new domestic life isn’t quite as blissful as she imagined. Alicia participates in Philadelphia Fashion Week in an effort to promote her boutiques–the only thing keeping her from financial ruin after her assets were frozen when she was arrested. With everyone under such stress, the women decide a getaway to Las Vegas is the perfect remedy for all their troubles. While they hope that a trip to fabulous Sin City will force a much needed reconciliation between Renee and Natalie, they couldn’t be more wrong.

Tonight’s episode is going to be another drama packed one, which you won’t want to miss. So be sure to tune in for our live coverage of VH1’s Mob Wives Season 4 Episode 4 at 10PM EST! While you wait for our recap, hit the comments and let us know how excited you are about the new episode of Mob Wives tonight.

Tonight’s episode of Mob Wives opens with Renee Graziano and her son AJ at a restaurant. Renee wants AJ to meet her boyfriend Michael and see what he thinks of him. AJ isn’t impressed that Michael is late, and Michael isn’t impressed that AJ is on his phone the whole time. Renee is annoyed because Michael announces that he isn’t eating, he has to meet a business partner is a little while. AJ makes things worse by criticizing Renee’s temper in front of Michael.

Natalie is out to dinner with her boyfriend London. Natalie fills him in on what happened between her and Renee, and how Renee snapped on her for saying Michael “smelled delicious.” Natalie is annoyed that none of the other girls stuck up for her when Renee began freaking out on her. London encourages Natalie to work things out with Renee, for their businesses sake.

Big Ang, Alicia, Drita, and Renee meet up for drinks at the golf course. Drita is annoyed by how lazy her husband is, she needs a vacation. They decide to take a trip together and have a “girl’s weekend.” They want to go to Vegas, but Alicia has to check with her bond officer before she leaves town. Alicia wants to invite Natalie, but Renee says she doesn’t want her on their trip after their big argument. After some persuasion Renee agrees to let Natalie come to Vegas with them.

Drita heads to the hardware store to get sandpaper and spackle for her house renovation. Her husband Lee calls her and wants to know where she is. She breaks the news to him that she is going to Vegas for the weekend, Lee flips out her on and tells her he didn’t give her permission to go, and calls her a “low-life.”

Alicia is busy picking out models and outfits from her boutique for Philly Fashion week. Natalie heads to the show to support her, and Alicia invites her to go to Vegas with her and the girls. Natalie has no intention of making amends with Renee. Natalie thinks Renee has no class and her boyfriend Michael looks like a turtle. She does agree to go to Vegas with all the girls though.

It’s time for the girls’ vacation. They’re off to a bumpy start though. Big Ang picks up Renee from her house, and something is off with her. She keeps saying she is “stressed,” she doesn’t feel good, her chest hurts, and she thinks she is having a panic attack. She says she needs some Xanax.

Big Ang and Renee arrive at their hotel room. Ang is trying to get Renee to get it together. She took Xanax, anti-depressants, drank eight drinks on the plane, and is drinking champagne. Ang is scared, she has never seen Renee this out of control. She is so drunk she dumped a plate of food on the rug, and keeps talking about how she is going to drown Natalie when she arrives at the hotel.

Drita arrives at the hotel, and Ang confides in her that Renee has been on a two-day drinking bender. Drita knows they are in trouble, she has known Renee long enough to know that they aren’t going to be able to reason with her.

Drita, Ang, Natalie, Alicia, and Renee head downstairs to the casino. They are trying to keep Renee and Natalie away separated. It doesn’t seem to matter though, all Renee keeps talking about is how she wants to hurt Natalie. Renee heads up to bed early and they are relieved to see her go. The rest of the girls stay downstairs and keep gambling. Drita obviously has a gambling problem. She can’t walk away from the black-jack table, and is down $2000.00.

Finally they convince her to walk away at 5:00 AM. They head back up to the hotel room and are shocked to see Renee is still awake. And, she is trying to swim in the pool on the balcony, on the 34th floor. She is in no condition to be near a pool, let alone on a balcony.