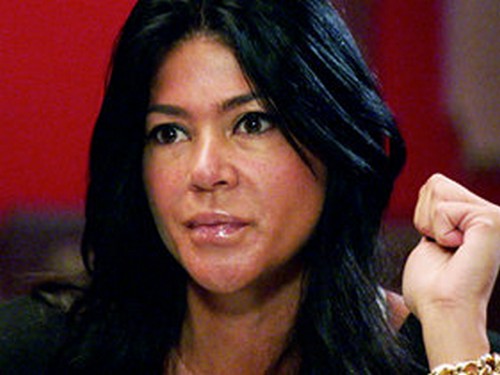 Tonight on VH1 their docu-soap series MOB WIVES continues with an all new episode.  On tonight’s show called, “Eat Worms B***h,”  Drita writes a track inspired by her life. Elsewhere, Natalie pushes her boyfriend to take their relationship to the next level, and Alicia’s stunning allegation continues to upset Renee. Did you watch last week’s episode?  We did and we recapped it right here for you.

On last week’s episode Drita had a violent nightmare that she was convinced it was a bad sign of things to come. Natalie revealed to Ang and Drita that Renee’s apology was meaningless, and that she was still furious over Renee’s admission that Renee saw her as a “piece of trash”. Meanwhile, Renee told her son, AJ that she could’t get over Natalie’s insults about her Mob Candy clothing line. When a tabloid newspaper ran several articles attacking Alicia, the women all speculated…who could be feeding the press information? They also worried that Alicia could be headed to jail after the judge for her case summoned her to court. When Ang, Drita, and Renee made a visit to Philly to show support for Alicia during this difficult time, Alicia shocked everyone when she accused someone in their inner circle of being “the leak.”

On tonight’s episode after making her hip-hop debut alongside French Montana two years ago, Drita jumps at the opportunity to write another track inspired by her life, but finds herself at a loss for words when it’s time to put the pen-to-the-pad. Natalie puts pressure on her boyfriend London to take things to the next level. Meanwhile, Renee is still upset about Alicia’s shocking allegation that she’s “the leak” in Alicia’s circle. Unbeknownst to everyone else, Renee is also dealing with her own personal drama when she receives a disturbing letter from her ex-husband. When Alicia and Renee sit down to air out their differences, their conversation gets so intense that their relationship may never recover.

Tonight’s episode is going to be another drama packed one, which you won’t want to miss. So be sure to tune in for our live coverage of VH1′s Mob Wives Season 4 Episode 8 at 10PM EST! While you wait for our recap, hit the comments and let us know how excited you are about the new episode of Mob Wives tonight.

Tonight’s episode of Mob Wives opens with Drita meeting with her music producer, he wants her back in the studio. He has a new track called “Moneybags” that he wants her to rap on. Her producer wants her to collaborate with Method Man. Drita is blown away, she is a die-hard Method Man fan, but she is scared that she may not live up to his expectations.

Renee and Big Ang head for a walk in the park. Renee is still really upset about Alicia accusing her of being a “rat.”

Alicia and Drita are out to lunch discussing the ordeal. Drita thought that Alicia told Renee about what was on tape. Alicia didn’t tell Renee anything about her wiretaps, she was discussing it with someone else. Alicia blames Renee for “her business being leaked to the press.” Drita thinks that Alicia should sit down with Renee and get to the bottom of it.

Big Ang thinks that Alicia is “just on edge.” Renee doesn’t want to hear it though, she is irate that Alicia would dare call her a “rat.”

Drita heads home to try to write a rap for the “Moneybags” track with Method Man. She asks her 5 year old daughter Gizelle for help “writing her rhymes.” Gizelle isn’t interested. Drita struggles to write her “16 bars,” writing is usually easy for her. Her daughter Aleeya sits down with her, and advises her to “stop thinking about it and it will come to her.”

Natalie heads out to dinner with her boyfriend London. They have been together for a year and a half now, and Natalie wants to know “where they stand.” London lives in New York and Natalie lives in Philly, and she is tired of “living out of a suitcase.” She wants London to move to Philly, because she can’t leave her family business, and she needs help with her son. London isn’t in a hurry to pack up and move to Philly. Natalie wants him to make a choice though, if he can’t commit to moving to Philly with her then she may end the relationship.

Renee is at home still fuming about Alicia, and she receives a letter from Junior (her ex-husband) in the mail. She is shocked at how “twisted” the letter is. Junior says he will “forgive her if she will forgive him,” but she doesn’t want to hear it. She thinks Junior is a socio-path and a rat. Renee’s son AJ walks in the door, and Renee tries to show him the letter she received from his father. AJ tells her that he “doesn’t want to hear about it.”

Natalie pays Alicia a visit, and Alicia fills her in on her drama with Renee. Renee is tweeting messages about how Alicia’s “damsel in distress act is getting old.” Alicia is upset because everything she has shared with Renee, Renee has told her friend Carla, and Alicia has emailed to prove it. Natalie is disgusted that Renee is telling people Alicia’s business.

Renee heads out to lunch the next day with her friend Carla, Carla grew up with Eddie (Alicia’s husband) and Renee. Renee tells Carla that Alicia doesn’t want her talking to her husband anymore, and discusses the wiretaps with her (the same wiretaps that Renee swears she doesn’t talk about with anyone). Carla thinks Alicia is being ridiculous, they think that “Alicia isn’t form their world, and she needs to stop acting like she is.”

Drita heads over to Big Ang’s house to discuss Renee’s crazy tweets. Drita reveals that Alicia called Renee and tried to “squash everything,” and then Renee went on Twitter calling her a “damsel in distress.” Drita and Ang think that Alicia is “going to give it to Renee,” and they don’t blame her.

Alicia and Renee meet up at a restaurant to discuss their differences. Renee doesn’t think that she has done anything wrong, because she has never said anything bad about Alicia and Eddie. That isn’t the point though, Alicia doesn’t want her discussing her and Eddie at all. Alicia snaps on Renee and tells her she can “bring it.” Renee doesn’t back down, she is still furious that Alicia called her a “rat.” Alicia brings up the Tweets, and Renee denies that they are about her. Alicia thinks Renee is being a coward. Renee thinks Alicia is “out of her mind,” and “nobody in their circle actually likes her.” Alicia calls Renee out on telling people that she has a boyfriend, Renee admits that she did say that, because someone told her that. Renee tells Alicia she is an “ignorant fool” and she “doesn’t like her as a person,” and then she storms out.

The battle lines have been drawn between Renee and Alicia.