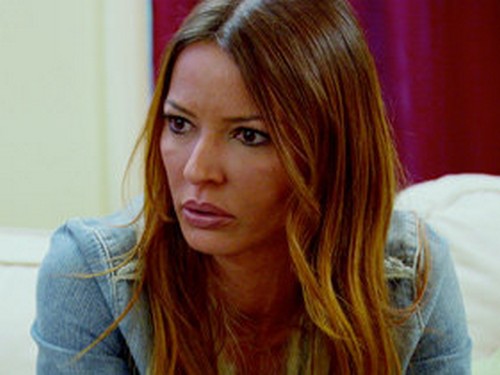 Tonight on VH1 their docu-soap series MOB WIVES continues with an all new episode.  On tonight’s show called, “Purgatory,”  Natalie hosts a Halloween bash at her funeral home. Meanwhile, a surprise guest arrives as Drita works on her hip-hop track; and Ang addresses baby issues. Did you watch last week’s episode?  We did and we recapped it right here for you.

On last week’s episode after making her hip-hop debuted alongside French Montana two years ago, Drita jumped at the opportunity to write another track inspired by her life, but found herself at a loss for words when it was time to put the pen-to-the-pad. Natalie put pressure on her boyfriend London to take things to the next level. Meanwhile, Renee was still upset about Alicia’s shocking allegation that she’s “the leak” in Alicia’s circle. Unbeknownst to everyone else, Renee was also dealing with her own personal drama when she received a disturbing letter from her ex-husband. When Alicia and Renee sat down to air out their differences, their conversation got so intense that their relationship might never recover.

On tonight’s episode Natalie is having a blowout Halloween party at her funeral home and everyone is invited, including Renee, though Renee’s not so sure the invite is sincere. When Drita starts to lay down her lyrics for her hip-hop track, a surprise guest changes everything. Ang and Neil discuss the next step in their plan to have a baby, putting all their options on the table, including “building one.” At Natalie’s Halloween party everyone looks terrifying, but the biggest fright comes from an unexpected text message from Renee. Drita and Ang are so offended, they confront Renee… with explosive results.

Tonight’s episode is going to be another drama packed one, which you won’t want to miss. So be sure to tune in for our live coverage of VH1′s Mob Wives Season 4 Episode 8 at 10PM EST! While you wait for our recap, hit the comments and let us know how excited you are about the new episode of Mob Wives tonight.

On tonight’s episode of Mob Wives the girls are celebrating Halloween. They head to a market to pick out pumpkins and Natalie announces she is having a Halloween party at her funeral home, and turning a casket into a bar. Natalie decides she should “be the bigger woman” and invite Renee to her party. She calls Renee and leaves her a voicemail inviting her to the party.

Renee and her son AJ head out to a pizza parlor, Renee wants to discuss AJ’s relationship with his girlfriend. He confesses that their relationship is serious. They aren’t serious enough to consider getting married, but they do want to get an apartment together. Renee doesn’t think it is such a great idea for AJ to move out of her house though. Renee announces she isn’t planning on dating right now, she wants to focus on turning her business into “a pot of gold.”

Drita meets up with her agent Anthony, to show her the lyrics she wrote to show to Method Man. Method Man shows up at the studio and surprises Drita, who jumps him like a giddy school-girl. It’s safe to say Drita is a big Method Man fan. After bonding with Method Man, Drita has to rap in front of him. Method Man gives her a few pointers, he wants her to rewrite the first few verses, and he helps her add some new words.

Big Ang is discussing having another baby with her husband. She thinks she should go the surrogate route, because she is too old to give birth.

Renee meets up with her friend Nikkole, and plays her the voicemail that Natalie left for her. Renee has no intention of going to Natalie’s Halloween party. Renee is annoyed that Natalie said “hey I’m with the girls,” because they used to be her girls and now they are hanging out with Natalie.

It’s time for Natalie’s Halloween party. She is dressed as “Purgatory,” decked out in half angel and half demon costumes. Drita arrives at the funeral home, and is blown away by Natalie’s costume, and how “naked” she is. Natalie shows Renee a page-long text message she received from Renee. In the text message Renee asks Natalie to meet up with her “face to face” to discuss their drama. And, she is afraid that the Halloween party was “a set up just like in Vegas.” Drita is annoyed, no one tried to set her up in Vegas. Alicia arrives at the party dressed as Wonder Woman, and Ang arrives shortly after with her husband Leo dressed as Zombies. Natalie heads out to the dance floor and Drita fills Big Ang and Alicia in on the latest Renee drama. Drita is floored that Renee accused them of “setting her up.”

Ang and Drita head outside to smoke and discuss Renee’s latest drama. Drita thinks that Renee is making a stupid decision by getting on their bad side. Drita is fed up with Renee’s drama and she is going to confront her.

The next day Drita and Ang head over to Renee’s house. Drita asks Renee why she didn’t come to the Halloween party, Renee replies that she “didn’t want to be there.” Drita calls Renee out and asks why she accused them of “setting her up.” Renee insists that she wasn’t talking about Drita and Ang when she used the word “set up.” Drita and Ang accept her explanation. So they move on, and discuss her drama with Alicia. Renee is furious that Alicia accused her of sleeping with Eddie, and that Alicia called her a “rat.” Renee says Drita is “good at pretending” she likes people. Drita is upset, she thinks Renee is implying she is fake. Renee announces she is going to meet with Natalie personally and “squash all the drama.”