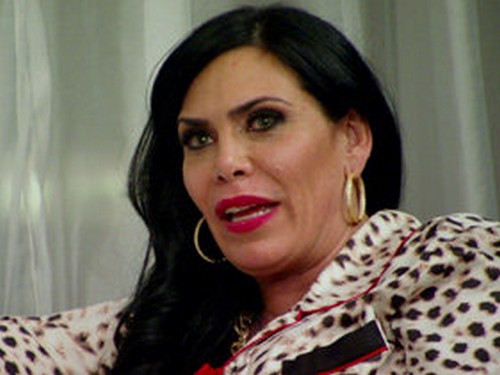 Tonight on VH1 their docu-soap series MOB WIVES continues with an all new episode.  On tonight’s show called, “Reunion,”  an anxious Alicia awaits Eddie’s sentencing outcome. Meanwhile, Renee meets with a lawyer; Natalie and Renee face one another, with explosive results; and Drita tries to bring everyone together at her house. Did you watch last week’s episode?  We did and we recapped it right here for you.

On last week’s episode the day of Eddie’s sentencing had finally arrived and Alicia anxiously awaited the outcome. Meanwhile, Renee met with a lawyer to discuss possible legal options after receiving a letter from Junior and a missed phone call from jail. Natalie and Renee met for the first time since their fallout in Las Vegas, with explosive results. When Drita set up a fancy “ladies lunch” at Le Cirque for everyone to air out their differences, one of the women dropped out at the last minute. The next night, Drita tried to get everyone together again at her house. With the tension high on all fronts and confrontation in the air, no one knew what to expect.

On tonight’s episode Drita’s dinner party takes an ugly turn when Renee blames Alicia’s insecurity for their issues. With her sentencing coming up, Alicia begins the stressful process of preparing herself and her young children for the very real possibility that she could go to jail. While Natalie and London go apartment hunting in New York, they get into an argument that jeopardizes their future together. Meanwhile, Drita has a grand opening for her new store and Ang continues her quest to build a baby. When Renee finds out that Natalie has publicly humiliated her on Twitter, their uneasy truce is broken…leaving their relationship in tatters and the other women running for cover.

Tonight’s episode is going to be another drama packed one, which you won’t want to miss. So be sure to tune in for our live coverage of VH1′s Mob Wives Season 4 Episode 11 at 10PM EST! While you wait for our recap, hit the comments and let us know how excited you are about the new episode of Mob Wives tonight.

Tonight’s episode of Mob Wives: New Blood picks up where we left off last week. Drita has invited Natalie, Alicia, and Big Ang over along with Renee. Drita wants to play mediator and finally settle all of the drama between Renee and the rest of the girls.

Their peace dinner starts out awkward and silent. Finally Alicia cuts to the chase, she tells Renee she needs to “cut to the chase” and she tells Renee that “leaking her business to the press has to stop.” Alicia explains that they had a serious miscommunication, and Alicia believes Renee that it wasn’t her that sold the stories to the paper. Renee calls Alicia out and tells her that she doesn’t have a problem with her, Alicia has a problem with her friend Carla. Drita steps in and explains that Carla and Renee have been friends for years and have a long history together, and Renee is always going to stick up for Carla.

In the end Renee and Alicia “give each other passes” and “chalk it up to a miscommunication.” They eat dessert, and then hug it out. Renee’s beef with the other Mob Wives is officially buried.

The next day Drita heads to her new store location and is furious when she walks in and realizes the contractor isn’t even close to being done. On top of not being done with the store, they are painting the walls the wrong color. Her Lady Boss sign arraigns while she is at the store trying to get it ready for the grand-opening, and it brings her spirits up some.

Natalie is in New York with her boyfriend London, looking at apartments. She wants him to move in with her in Philly, but she is being fair and checking out apartments. She doesn’t like the first apartment they look at, and she reminds London that she is not leaving Philly to move into a building with no washer, dryer, elevator, or closet space. Natalie realizes that London is not ready to give her a home or another baby, so she thinks it may be time to move on.

Alicia meets up with her friend Tina, and breaks down. She reveals that the bank mailed her a letter and told her they are closing all nine of her bank accounts, now the IRS is coming after her. She still hasn’t even told her sons that she may be going to jail soon, and she will be sentenced in just a week. Alicia begins crying and confesses that she is scared.

Big Ang, Renee, and Alicia head to Drita’s new store for its grand opening. Alicia fills the girls in on the details of her sentencing. Renee even offers to go to court with her for her sentencing, but Alicia says she goes alone with her brother.

The next day Renee gives Alicia a phone call. Renee is fuming, Natalie went on twitter and called Renee a “whore” and said that Renee “sucked married guys d—s.” Alicia explains to Renee that Natalie is “a big girl” and tells she needs to talk Natalie. Renee just gets more upset because she thinks that Alicia is taking Natalie’s side.

Big Ang and her husband are going to “build a baby.” Niel and Ang head to the sperm bank, and he has to go into a room and ejaculate in a cup, and then Ang just has to find an egg donor that she likes.

Alicia sits down at home with her sons and helps them write letters to their Dad in jail. While they are writing their letters, they receive a phone call from Alicia’s husband Eddie. After they get off the phone with Eddie, Alicia breaks the news to her sons that she may be going away to jail too.

Renee booked a suite in NYC and invited all of her friends for a “sexy pajama party.” Renee even invited Alicia, but not Natalie. Ang and Drita confront Renee and ask her what happened on Twitter. Renee fills them in on what Natalie said to her on Twitter. This time, for once, Renee actually wasn’t in the wrong. Drita and Ang agree with Renee, Natalie crossed a line this time. Renee confesses that she wants to hold Natalie’s head “under boiling water.” Renee declares that “Renee has had enough!” Drita just wants peace between her friends, she is tired of all of the bickering and fighting.