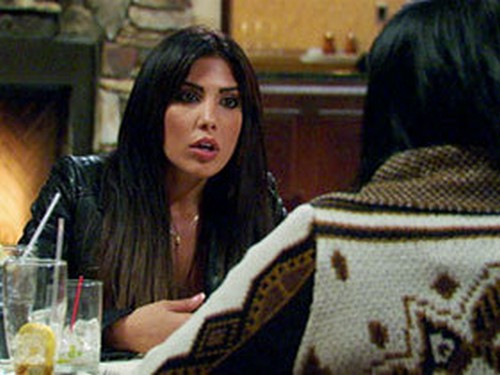 Tonight on VH1 their docu-soap series MOB WIVES continues with an all new episode.  On tonight’s show called, “Life Sentences,”  an anxious Alicia awaits Eddie’s sentencing outcome. Meanwhile, Renee meets with a lawyer; Natalie and Renee face one another, with explosive results; and Drita tries to bring everyone together at her house. Did you watch last week’s episode?  We did and we recapped it right here for you.

On last week’s episode Natalie was having a blowout Halloween party at her funeral home and everyone was invited, including Renee, though Renee was not so sure the invite was sincere. When Drita started to lay down her lyrics for her hip-hop track, a surprise guest changed everything. Ang and Neil discussed the next step in their plan to have a baby, putting all their options on the table, including “building one.” At Natalie’s Halloween party everyone looked terrifying, but the biggest fright came from an unexpected text message from Renee. Drita and Ang were so offended, they confronted Renee… with explosive results.

On tonight’s episode the day of Eddie’s sentencing has finally arrived and Alicia anxiously awaits the outcome. Meanwhile, Renee meets with a lawyer to discuss possible legal options after receiving a letter from Junior and a missed phone call from jail. Natalie and Renee meet for the first time since their fallout in Las Vegas, with explosive results. When Drita set up a fancy “ladies lunch” at Le Cirque for everyone to air out their differences, one of the women drops out at the last minute. The next night, Drita tries to get everyone together again at her house. With the tension high on all fronts and confrontation in the air, no one knows what to expect.

Tonight’s episode is going to be another drama packed one, which you won’t want to miss. So be sure to tune in for our live coverage of VH1′s Mob Wives Season 4 Episode 10 at 10PM EST! While you wait for our recap, hit the comments and let us know how excited you are about the new episode of Mob Wives tonight.

Tonight’s episode of Mob Wives: New Blood starts off in Philadelphia. Alicia calls Natalie, stressed out, her lawyer called and said her husband Eddie’s sentencing is today. If things go well, then Eddie will only have to do 1-2 years in prison. Alicia is scared that if the judges are really hard on him, they are going to be really hard on her. Natalie reminds her that she has to stay strong for Eddie and her kids.

Natalie heads out to dinner with Renee, because Renee wants to resolve their issues, and “dead the situation.” Renee tells her that she doesn’t want her to do Mob Candy anymore, Natalie tells her she had no intention of doing Mob Candy anymore. Natalie wants to know why Renee said she felt like she was being “set up” when she invited her to the Halloween Party. Renee explains that she didn’t want to walk in to the “lion’s den.” Natalie explains to Renee that she trusted her, and she felt betrayed by Renee for her to treat her the way that she did. Renee tells Natalie she wants to “try to be friends with her.” Renee is annoyed because Natalie thinks she is being “disloyal.” She explains to Natalie that she was never disloyal to her. Natalie brings up the issue with Alicia’s tapes. Renee storms out, she “refuses to talk about it anymore.”

Later that night big Ang receives a phone call from Alicia. Eddie got sentenced, the judge accepted the plea deal, and he will be home in a year and a half. He will be on very strict parole when he does get released though. Big Ang is happy for Alicia, Eddie, and their boys.

The next day Drita receives a phone call from her husband Lee. They are both so busy with their stores that they never see each other, so they only catch up on the phone. Drita fills Lee in on her rapping. She thinks that Lee “f—-d her up.” Now that she is happy and they are like the “Brady Bunch,” she doesn’t have anything to rap about.

Drita has put together a lunch for all the girls at a classy restaurant. She wants them all to be nice and get along, she is tired of feeling like they are in 7th grade and she can only be friends with one of them at a time.

Renee is feeling uneasy about the letter she received from Junior and the weird phone calls she received from jail. She decides to see a lawyer to make sure she will be safe when he gets out of jail. Renee tells the lawyer that Junior is a “rat, and he put her father in jail.” Renee wants to know what she can do to make sure Junior can’t contact her anymore. The lawyer tells her she can get a “stay away order,” from court so that Junior can’t contact her. Renee feels like a “rat” if she goes to court to get an order against Junior.

Big Ang and Renee head to the nail salon to catch up. Ang is stressed because her daughter Raquel got engaged, and now she has to plan a wedding. Renee fills Ang in on her dinner with Natalie. Renee explains to Ang that Natalie tried to make an issue about Alicia’s wiretaps. Renee can’t believe that Natalie brought up more drama, instead of trying to clear the drama between them. Ang agrees with Renee.

All the girls head to their lunch at La Cirque, that Drita had planned. Drita is hoping that their lunch will get every one on the same page, because she and Ang are tired of being stuck in the middle. Ang, Drita, Alicia, and Natalie arrive, and Ang announces that Renee called her right before lunch and says that she won’t be coming to lunch. The other girls are furious, Alicia is tired of talking about Renee, she wants to “talk to Renee.” Drita is furious that Renee ditched lunch after all of the planning that she put into it.

Meanwhile Renee heads out to lunch with her friend Nikole. Renee fills her friend Nikole in on the “stay away order.” She isn’t sure if she is going to go through with the order of protection yet. Renee doesn’t trust Ang or Drita to discuss it with them, because they have been hanging out with the Philly girls.

Ang’s son AJ pays her a visit, and reveals that he proposed to his girlfriend. Ang is shocked that her son actually got down on one knee and asked his girlfriend Gabby to marry her. Ang gives him a lecture about “getting his s—t together,” before his baby comes.

Drita meets up with Renee the next day to see why she ditched her lunch date. Renee explains that after her meeting with Natalie she had no desire to sit down to eat lunch with her. Drita plans another dinner, at her house, and forces Renee to say she is coming. Renee isn’t thrilled about the idea, but she agrees.

Meanwhile Natalie is at a photo shoot for a new modeling gig, and Alicia has come along for moral support and to style Natalie with clothes form her store. After the gig, Natalie and Renee discuss their drama with Renee. Alicia tells her not to let Renee get to her. Alicia confesses to Natalie that she thinks she is “slipping into a state of depression” over her upcoming sentencing. Natalie reassures Alicia, and reminds her she is “always there for her.”

It’s time for dinner at Drita’s house. She has put a lot of effort into preparing dinner, so everyone better show up. Natalie arrives first, followed by Big Ang and Alicia. Natalie and Alicia are impressed by how nice Drita’s house is, and none of them knew she could cook. They gather around the table, and wait uneasily for Renee to arrive.