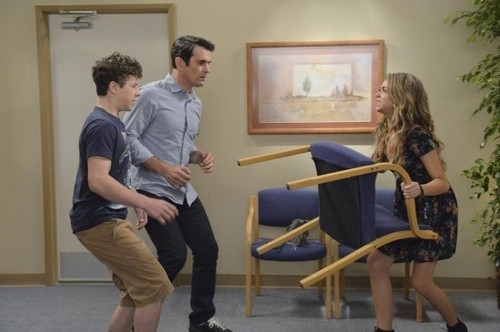 Tonight ABC’s hit show Modern Family starring Phil Dunphy continues with another all new Wednesday October 1, season 6 episode 2 called ‘’Do Not Push.” On tonight’s show Jay and Gloria’s anniversary creates a dilemma when they can’t decide what kind of gifts to give. Elsewhere, the Dunphys tag along on Alex’s tour of Caltech, but Phil, Luke and Haley get wrapped up in a campus experiment, while Claire tries to convince her to go there; and Mitchell, Cameron and Lily pose for a new portrait for their mantel.

On the last episode a happy and carefree summer in the Dunphy household came to an end in the Season 6 premiere when Alex returned from a humanitarian mission. Meanwhile, Mitchell and Cameron got back from their honeymoon, but the latter was still feeling like a newlywed; and Gloria sent a message to Jay about his slovenly appearance.

On tonight’s show it’s Jay and Gloria’s anniversary and they can’t seem to get on the same page on what kind of gift to give – sentimental or expensive? And, the Dunphys head to Caltech for Alex’s college tour and while Claire is busy convincing her to choose this school and stay close to home, Phil, Luke and Haley branch off to participate in a psyche experiment. Mitch and Cam are taking a new family portrait with Lily to replace the old one above their mantel, but Lily gives some serious face.

RECAP: Tonight’s episode of Modern Family begins with Clare and Phil checking out the campus of California Tech with Luke, Alex, and Haley. Clare is determined to get Alex to go to Cal Tech because she will only be forty-five minutes away from home. She thinks that if she goes away to college, she will never see her again.

Manny tells Jay Happy Anniversary, and is distraught when he sees that Gloria left a gift for him on the table. He is sure that his gift isn’t good enough once he sees the package and runs out the back door to avoid her. Meanwhile, Mitchell and Cameron are trying to take a family photo with Lily and she isn’t exactly photogenic.

Manny finds Jay hiding in the garage, and he confesses that he didn’t buy Gloria a gift, he made her a ceramic bunny in his pottery class because he used to called her “bunny.” He thinks Gloria got him an expensive watch, so his bunny won’t be good enough.

Phil, Haley, and Luke head to the Psych department to make $50 on experiments. Clare and Alex head out on the college tour. Alex breaks Clare’s heart by informing her that she isn’t going to Cal Tech because it is too close to home and she needs space from her.

Haley, Phil, and Luke are locked in a lobby with a mirror and a huge red button on the wall with a sign taped to it that says “Do Not Push.” The scientist tells them that they will call them in for a few minutes for the experiment. Phil thinks that they are already in the experiment, and won’t let Luke push the button.

Clare makes friends with a nerdy kid on the tour named Jordan, she informs him that she doesn’t even want to go to Cal Tech, she wants to go to MIT. While she is awkwardly flirting with Jordan she leans against a pole and pushes an emergency button and sires begin whaling.

Manny convinces Jay that his gift is perfect for Gloria. When Jay gives it to her he she smashes it on the table and thinks there is a present inside. She is confused when she realizes it is empty. Jay lies and says that the jeweler forgot to put the bracelet he bought for her inside the bunny, and runs out the door to the jewelry store. After he leaves Manny scolds his mom and informs her that the bunny was her present and Jay worked really hard on it.

Meanwhile at Cal Tech, Luke, Phil, and Haley are having a meltdown. Now Phil and Luke want to push the button, but Haley is swinging a chair at them and won’t let her push the button. She cries that she has been breaking her rules all her life and she is a huge failure and lives in her parent’s basement. Phil comforts Haley and says that they are all united and not going to push the button. They decide to all push the button to solidify their unity. A scientist walks and asks them why they pushed the button, now the AC won’t turn off and they are going to have to call the repair guy again. They realize that the button wasn’t the test after all.

After the tour ends, Jason hugs Alex good-bye and tells her to look him up if she goes to Cal Tech. Clare finds Alex and apologizes for pushing her to go to this college instead of MIT, Alex informs her that she has decided that Cal Tech isn’t so bad. Clare thinks Alex isn’t ready to move away from her, but really she just has a crush on Jason.