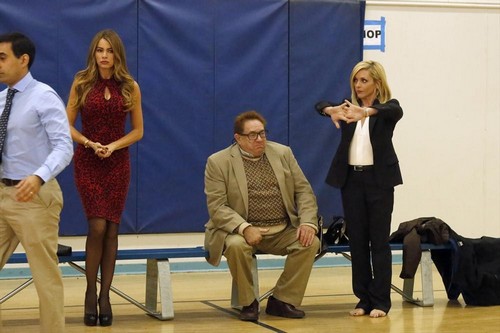 Tonight is ABC’s hit show Modern Family  continues with another new episode called “Under Pressure.”  On tonight’s show tit’s high school all over again when Claire, Phil, Jay and Gloria go to an open house.  Did you watch the last episode?  We did and we recapped it right here for you.

On the last episode Phil tricked Luke into taking a dance class, but the jokes was on him when the white lie indirectly landed him in the slammer. Meanwhile, Jay and Gloria were throwing birthday parties for both Manny and Joe and are concerned Manny might be going for girls out of his league, and Mitch and Cam got a rude awakening in the cutthroat world of booking a wedding venue.

On tonight’s show The high school open house puts the parents in a bit of a time warp when Claire finds herself stressed out by all the pressure, Gloria encounters a “mean girl” mom (guest star Jane Krakowski) and Jay teaches Phil how to play a little hookie. Elsewhere, Mitchell gets defensive when he encounters his judgemental, environmentalist neighbor (guest star Jesse Eisenberg) and Alex goes to see a therapist (guest star John Benjamin Hickey).

It’s Alex’s birthday and Cam interrupts to start an anecdote but gets shut down. Alex freaks out and stabs her cake because she needs to be studying for her SATs. She crams her fists into the cake and then into her mouth while the whole family looks on in shock.

Claire tells the family to be nice to Alex since she’s stressed and Haley says Alex would kill her first. Phil thinks she wouldn’t kill him because she likes him. Alex comes in and Claire sends the other kids out of the room. Alex says she needs to see a therapist and already made an appointment. Phil says she’s like a self cleaning oven.

Cam says there’s a caste system at school and he’s tired of getting treated like less than academic teachers. Asher (played by Jesse Eisenberg) stops by to criticize what he sees as them being environmentally hostile. It diverges into a snippy argument.

Mannie has a date but doesn’t know the girl’s name. There’s a new girl at school and Luke caled dibs and Mannie doesn’t like that but then they find out there are twins so they are headed for a double date.

Gloria comes to school in a sexy dress with homemade food to try and bribe the history teacher into letting Mannie go to DC. But then Donna Duncan (guest star Jane Krakowski) is there to also bribe the teacher for her son to get to go to DC as well. She gets snotty with Gloria and tries to marginalize Mannie as well. Jay breaks out a flask of Scotch and tempts Phil to sniff it and Phil gets caught by the teacher and chastised while Jay plays innocent.

Alex is at the therapist and tells him about her meltdown and is worried it will happen in the middle of the SATs. She says her limbic system is off. The shrink says he charges the same even if she self-diagnoses. He tells her these things take time and she tells him he may not be up to the challenge. She calls him old and he gets sarcastic with her. He gets her to breathe deeply and asks what’s on her mind. Alex says she forgot to charge her computer, ran out of blue index cards and asks if she should get a job or internship this summer and wonders if Hilary will run in 2016. The shrink says wow.

Claire is in Alex’s class and finds out she’s totally out of the loop because she’s worried aout Luke and Haley. The other parents are taking lots of notes and Claire is forced to write on her coffee cup.

Turns out Luke and Mannie are each with the wrong twin and Luke pulls him aside and says they need to swap. He says they’ll never notice because they’re twin and Mannie rolls his eyes.

Haley brings a dollhouse over for Lily and Mitchell asks her to turn off her car because of his crazy neighbor. She says he won a trophy and should wave it in his neighbor’s face. They pull out the dollhouse and send styro peanuts everywhere sending Mitchell into a panic.

Jay refuses to continue the teacher’s tour because he’s 60. He heads into the teacher’s lounge and Phil freaks and says they can’t go in and Jay says he’s teaching him to be a b-tch. Donna knocks books out of Claire’s hands and acts like a mean girl.

Cam is giving his boring lecture and parents are walking out. He offers to play dodge ball and the parents are eager and he gets the game started. He sits a fat out of shape parent down to be the ref. Donna and Gloria are against each other and brutal. They end up the final two and both end up jumping on Cam while the dads all shoot video on their phones.

Haley and Mitchell try to clean up the peanuts and end up trashing the neighbor’s yard just as he rides up.

Phil gets the TV working in the teacher’s lounge for Jay and he explains how he was in the AV club. Phil decides to impress him and puts the game on for them on a big screen in the auditorium. Jay says it’s the best open house ever – until the projector catches on fire.

Alex tells her shrink she’s always been a neurotic overachiever starting in elementary school when she had to win a spelling bee her parents didn’t know about and that didn’t really matter. He asks why she feels so responsible to win. He thinks it’s an internal thing and she says once you start overachieving everyone expects you to continue. She tells him it’s what makes her who she is and he asks how that is and she says it’s mostly good but sometimes exhausting and says it’s hard being her.

He asks about her family and she says she’s not like any of them. She says they tell her to study less and go have fun. She says her siblings don’t carry about school. He asks why she’s the only one who is so driven. Alex says her family doesn’t get her. He asks how that makes her feel and she says she doesn’t know and then says she feels alone.

Cam tells Gloria they have ruined dodge ball. Donna says she has to get the trip for Wesley because he blames her for the divorce. Gloria says it will get better.

Phil and Jay come out of the principal’s office and Jay says he’ll pay for the projector. He sees Gloria waiting and she says she got in trouble and he tells the principal to put her trouble on her tab. But the principal only wants to talk to Cam!

Claire meets Alex after her shrink appointment and says she had no idea what kind of stress she was dealing with and doesn’t know how she doesn’t have a breakdown every day. Alex breaks down in tears and holds her mom tight. Claire kisses her head and comforts her.

Mitchell apologizes to Asher and he admits that no one wants to be friends with him because his lifestyle is off putting and he has had salmonella four times because it takes four days to cook achicken with solar power. Mitchell invites him over to eat and Lily says he can play with her dollhouse. Asher asks if it was made from sustainable materials and Lily tells him to forget it.