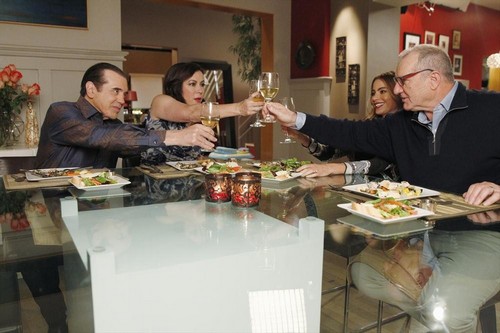 Tonight is ABC’s hit show Modern Family  continues with another new episode called “Three Dinners.”  On tonight’s show dinner time does not necessarily equal quality time.  Chazz Palminteri and Jennifer Tilly reprise their roles as Shorty and Darlene.  Did you watch the last episode?  We did and we recapped it right here for you.

On the last episode the high school open house put the parents in a bit of a time warp when Claire found herself stressed out by all the pressure, Gloria encountered a “mean girl” mom (guest star Jane Krakowski) and Jay taught Phil how to play a little hookie. Elsewhere, Mitchell got defensive when he encountered his judgmental, environmentalist neighbor (guest star Jesse Eisenberg) and Alexwent to see a therapist (guest star John Benjamin Hickey).

On tonight’s show Phil and Claire take Haley out to dinner to discuss her future, but Haley manages to turn the tables. Elsewhere, Jay’s friend Shorty and wife Darlene are back visiting, and they have some news that doesn’t sit well with Jay. And, Mitch and Cam decide to have a nice, romantic dinner date where they don’t talk about the wedding or about Lily, which then leads to a lot of awkward silences.

Tonight’s episode of Modern Family opens with Phil and his kids getting ready for school/work. Luke reveals that he is quitting the team because kids keep picking on him, Phil is devastated. He tells Luke he isn’t quitting, and tells Haley and Alex that they are to go to his brothers’ game and support him, even though they don’t want to.

Gloria is driving Lily to school, and giving her boy advice. She has a crush on a boy named Patrick, but he doesn’t notice her.

Jay is driving Claire to work, he is upset though because she jumps out of the car a block before the building because she is embarrassed to be seen getting a ride from her Dad.

Mitchell is struggling to find a way to break the news to his boss Charlie that he is leaving the company.

Claire is getting reprimanded by one of the managers at work, and Jay walks in and tells him that he has made his point. Claire is upset that Jay won’t “butt out” of her business, she wants everyone at the company to see her as a co-worker, not the boss’s daughter.

Cam is taking his freshman football game very seriously. If he wins this game, he will be the winningest freshman coach in the history of their high-school. When the opposing team arrives, he finds out that their coach died the night before and they are playing this game in his honor.

Phil is having a hard time at work, he is getting ready to show a house, but he lost the keys. So, he has to climb in through a window, however he loses his shoe in an aquarium with the homeowner’s pet snake. He is determined to overcome the obstacles and make a sale, he hasn’t made on yet this month. His plan is derailed when the potential buyers show up and tell him they are no longer interested in buying a house.

When Gloria picks Lily up at school, the teacher tells her that they had a problem at school. Lily attacked her classmate Patrick, and forced him onto the ground and kissed him. Apparently she took Gloria’s advice the wrong way on the way to school.

Haley is using Luke’s football game as an opportune time to make out with Dylan under the bleachers. Meanwhile Cam is lecturing his team, they are throwing the game because they feel bad for the other team, and simultaneously throwing Cam’s winning season.

Claire has locked herself in a closet at work, she is trying to climb out through the roof. She refuses to ask Jay for help because she doesn’t want special treatment. Little does she know, he is watching her on the security camera, as she basically levels the warehouse and knocks down a couple dozen closets trying to get out of the one she locked herself in.

Claire and Jay head to the football game, and are joined by Phil. Claire and Jay make amends and he agrees to treat her like less of daughter and more like an employee.

Dylan invites Haley to the late night movies, but she declines but she has a midterm, and is actually taking school seriously.

Mitchell brought his boss to the football game, and he found the letter Mitchell had wrote to him about leaving the company, on the ground. Mitchell is finally forced to man up and quit his job.

Cam’s team uses Phil’s fake-out play, and manages to win the game at the last second, due to Manny’s field-goal. Manny is depressed though, he actually tried to miss the goal so the other team would win, and ended up scoring. Cam cheers him up with an inspiration pep-talk, and then mentions naming the football field after himself, “Cam Tucker-dome.”