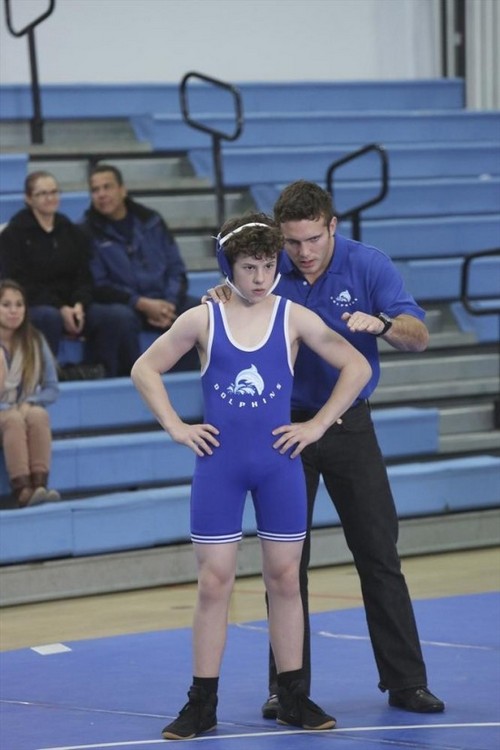 Tonight is ABC’s hit show Modern Family  continues with another new episode called “The Feud.”    On tonight’s showGloria chaperones Manny’s school field trip to the museum.  Did you watch last week’s two-hour season premiere?  We did and we recapped it right here for you.

On last week’s episode with a big football game coming up and a record to break, Coach Cam was intensely focused and showing no mercy even when the opposing team was playing with an unexpected disadvantage. Elsewhere, Claire was determined to prove to the staff that she is more than just the boss’s daughter, and Phil tried to teach his kids a lesson about optimism, but the universe just wasn’t cooperating.

On tonight’s episode Phil is upset to have lost his elected office of social chair to his nemesis Gil Thorpe, and when he finds out Luke is competing against Gil’s kid in a wrestling match, it becomes his own personal battle. Claire is nervous for a big client meeting but things get extra hairy when Mitch and Cam ask her to pick up Lily from school and conveniently leave out the fact that her class just had a lice scare. Elsewhere, Gloria chaperones Manny’s school field trip to the museum.

There is a lice epidemic at Lily’s school. Cam and Mitch received a call from her school to come and get her but they didn’t want to risk infestation. So they sent in poor unknowing Claire. Claire picked up her niece out of the goodness of her heart on the same day she was to pitch a contract to a potential new client.

After she dropped off Lilly at home she then attended her meeting like normal. And from all appearances the meetings was going just fine. Except Claire was jittery. That could have been put down to her normal on edge behavior but this time was different. She kept on moving around so that she wouldn’t look unprofessional by scratching her sudden itchy head too much.

Luckily Mitchell was nearby when he got the call from an anxious Cam. Cam had noticed their daughter had lice and told him to warn Claire. Too late! Mitch saw Claire scratching and tried to warn her. He waited until her client had to take a phone call before admitting its highly likely she contracted lice.

She was mortified. When her client came back in she tried to keep her distance but he wanted to celebrate signing on. He came in for a close hug.

Speaking of embarrassing, Phil has to deal with his old foe. Some big jerk that always takes the opportunity to make Phil feel bad about of himself. Yet Phil wasn’t going to let the other man get to him. They ran into each other at their sons’ wrestling match and he wanted to think of Luke.

Phil had told Luke to go out and have fun. Also that the end results didn’t matter. As long as Luke had fun then he was going to be proud of his son. His good intentions however took a detour. It was one thing for Gil to take social chair from him and quite another to rub it in his face. Plus Jay was there and he had his own plans to begin with.

Gil’s father tends to catch him as his lowest as well. So both men really wanted Luke to wipe the floor with the Jerk the third. What they got was Luke barely lasting a full minute before he got beat. Luke looked up from the mat to find the men hanging their heads in shame but he didn’t let that get to him.

They took him out for lunch and he reassured them that he knows they were still proud of him. Jay doesn’t buy it. He feels that Luke is bottling up his emotions likes the men in his family tend to do. While Phil believes maybe his son is more evolved because he’s a Dunphy.

Although he quickly changes his mind when it looks like Luke attacked Gil’s son. That made Gil try to pry off Luke which made Phil try to pry off Gil followed by Gil’s dad getting in and Jay making sure it was a fair fight. It wasn’t until everyone assumed that Luke was actually giving the Heimlich maneuver that everyone let go.

Luke helped someone’s life but he didn’t do it on purpose. He confessed to his dad and grandfather that he thought the kid was making fun of him by making choking noise. They think it would best to let people believe he was being hero rather than the truth.

Being embarrassed helped Luke in hi situation though the same can’t be said of Manny. He was on field trip with his class and their parents. They were mostly mothers and they were kind of catty towards Gloria. At first she didn’t care. She explained to her that no one can make you feel awkward unless you allowed them. He was buying it.

He’s shoes were squeaky and he was afraid his classmates would make fun of him for it.

Then Gloria got a reaction to something and half her face went bright red as a result. She wanted to be able to sneak out of the museum when Manny stopped her. He told her that she wasn’t practicing what she preached. Once she realized how much of a hypocrite she was being; she decided to face the rest of the moms. But Manny stopped her. He chose to embarrass himself than let his mom get ridiculed.

In a funny twist, classmates weren’t bothered by the shoes. They much rather make jokes about his pink top anyway. That’s his nickname now. Manny is Pink Top.

The rest of the family went over to Claire where they managed to rescues Hailey and Alex. They were trapped in Hailey’s room by a possum and both girls were afraid to confront it. Thankfully they didn’t have to face it alone. Their family is like a predator to a possum and so the creature went his own way.

Gil came by the house later on. He wanted to apologize for treating Phil the way he did especially after what Luke did for his son. Phil accepted the apology and then introduced Gil to his niece, Lily. He told Gil how Lily loves piggyback rides and the other man offered to give her one.

That was so nice of Phil!