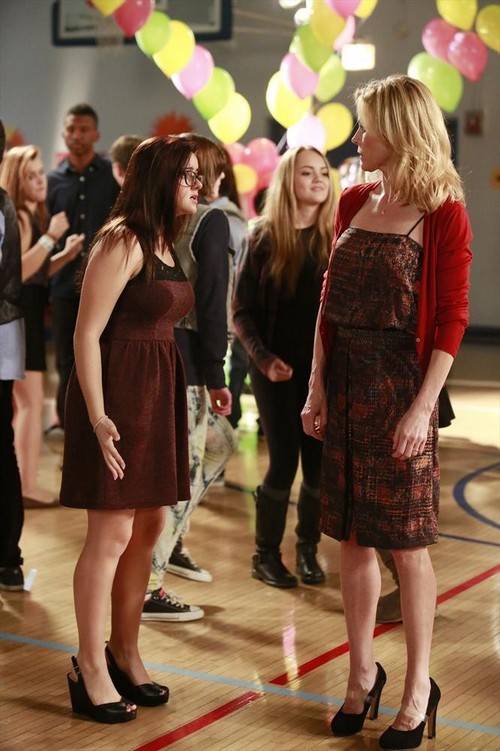 Tonight is ABC’s hit show Modern Family  continues with another new episode called “Spring-A-Ding-Fling”    On tonight’s show Cameron gets territorial when another popular teacher shows up and Mitchell starts a new job.  Did you watch last week’s two-hour season premiere?  We did and we recapped it right here for you.

On last week’s episode  Phil was upset to have lost his elected office of social chair to his nemesis Gil Thorpe, and when he found out Luke was competing against Gil’s kid in a wrestling match, it became his own personal battle. Claire was nervous for a big client meeting but things got extra hairy when Mitch and Cam asked her to pick up Lily from school and conveniently left out the fact that her class just had a lice scare. Elsewhere, Gloria chaperoned Manny’s school field trip to the museum.

On tonight’s episode Cameron is in charge of the school’s big spring dance, but when a popular teacher returns from sabbatical, a bit of not-so-friendly competition blooms. And with Claire on chaperone duty at the dance, Phil gets Haley to accompany him to his annual realtor’s banquet and is looking forward to impressing his little girl. Elsewhere, Mitch starts a new job and can’t seem to get a good read on the new boss or the work environment. Jay and Gloria babysit Lily and an accident with Gloria’s purse ignites a case of whodunit and it’s Lily’s word against baby Joe’s.

The kids’ spring dance is coming up and this year Cam was in charge of it. He can’t wait to show off all of his hard work especially to the staff. He’s become something of a star to them and Mr. Popularity doesn’t want to lose out on his new position. Not even to his recently returned predecessor. Stu came back early from his sabbatical and there isn’t enough room for both of them on top.

The Dunphy kids are attending the dance as well which means their micro-manager of a mother will also be attending. She loves being a chaperone to these things and she didn’t have anything else interesting on her calendar. Like Claire was going to pass up this opportunity just to go with Phil to a Real Estate Awards ceremony. She’s been going all the years before and her husband being the host hasn’t swayed her into finding the entire awards show the least bit interesting.

So she’ll be with her younger children and Phil will take their oldest, Hailey as his date.  Phil in is his usual good cheer is kind of excited to show off what he does to his daughter. That’s because he remembers how it used to be between them. Back when Hailey was little; she loved going with her dad to open houses. At one point Phil had even begun to dream about going into business with her when she grew up. Then life happened and that dream went away.

However knowing Hailey it should have died. She didn’t accept his invitation for father/daughter bonding time. She only said yes to distract him one night while she was sneaking in people for a secret party in her bedroom. And poor Phil never found out he’d been had… then. Although he’s about to now.

He spotted her texting during one of his skits and it made him literally fall off stage. He was so hurt he couldn’t go back to accept his award. Which turned out to be a good thing because Hailey went up and accepted it for him.

Kids can be devious and the true criminal mastermind of the family known as Lily is up to her old tricks. Gloria and Jay were asked to watch her one night when an accident occurred. Gloria’s bag was knocked over and her phone got broken because of it.

She wanted to give everyone a fair chance so she asked who didn’t. And Lily jumped to say it was baby Joe’s fault. How can that be possible? The last anyone checked Joe hasn’t begun walking yet. Not that Lily lets that stop her seeing as neither Jay nor Gloria could get her to crack. She’s just that good.

She staged a whole scene and everything with spilled baby powder and little powdery footprints all around her room. Again they asked her hoe could Joe do it and she told them that Joe always walks for her. So they made Lily test it out on the baby. She called him and Joe chose that exact moment to walk.

Now his parents believe he’s been doing it for a while when all along Lily just got really lucky!

Mitch couldn’t watch Lily because he started his new job but he might have a lot of unexpected free time coming up. As that’s what usually happens when you accidentally make your boss cry. Though Mitch didn’t mean to do it but he had gotten his wires cross and took out some frustrations on her that he later learned were completely unfair.

Well hey, this will give Cam more time to work on upcoming dances. Stu has been nothing but a pain in his side since arriving. Stealing the limelight which he knows rightfully belongs to Cam for doing such a great job. That’s why he tried to make himself feel better by winning the Faculty dance off.

Cam thought he had it in the bag after seeing old videos of Stu dancing weirdly. But Stu learned a few moves overseas so Cam brought out the big guns – he dragged Claire out onto the dance floor. Like he said “dancing with a lonely mom” wins him brownie points. And Claire needed to take her mind off her machinations. She tried to set up Alex and Luke with their friends and at first they weren’t all that appreciative.

Luke had said she broke his friend Rhonda by making her pretty and Alex accused her mother of pimping her out. Who tells a young teenage boy that he’ll be alone in the house with Alex – Claire does! It all worked itself out but she should start thinking these things through. That appears to be a Pritchard flaw!

It took Jay and Gloria a while to realize that Joe’ shoes were on the wrong feet. Sorry but Lily wasn’t as good as she thought she was!