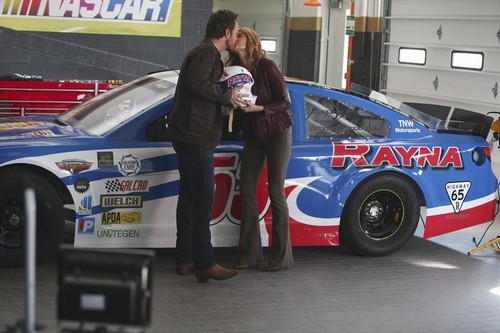 NASHVILLE continues on ABC tonight with a whole new episode.  Tonight’s episode is called, “It’s All Wrong, But It’s All Right,” and on  tonight’s season 2 episode 13 Luke surprises Rayna with a Nascar showcasing her brand and Juliette’s induction into the Grand Ole Opry takes a turn for the worse.  Did you watch the last episode before the break?  We did and we recapped it here for you!

On last episode Scarlett’s career was on fire as she sang “Free” in concert with Zac Brown (guest-starring as himself), but the demands of fame were burning her out. Rayna asked Deacon to help write a much-needed hit for her new album, and it was like old times–perhaps too much. Concert venues were dropping from Juliette’s tour and Jeff, her label head, was furious, and Zoey was bruised by Gunnar’s inattention when he got an invitation to co-write from Jay DeMarcus of Rascal Flatts.

On tonight’s episode Jeff is expecting Juliette to formally apologize for her behavior during her Grand Ole Opry ceremony, but at the last minute she has a change of heart and decides to standby the choices she’s made. Luke introduces Rayna to a power player that could help her get her distribution deal off the ground, and then surprises her with a NASCAR that is wrapped in Rayna Jayme’s graphics. Deacon is discovering his record deal might not be what he expected and Scarlett’s collaboration with Liam gets off to a rocky start. Will and Layla discover they aren’t all that different and find comfort in one another’s company and Teddy will stop at nothing to reveal Lamar’s connection to Peggy’s death.

Tonight’s episode marks the beginning of Rayna of going solo without her former record company backing her up. After all their hard work, Rayna and Liam have finished off her new album. Now all she needs is to figure out how to sell her album against all the big corporations already out there. Luckily Luke gave her hand. He wanted to show off his new Nascar ride. He was hoping to impress her by giving away free press with a car literally with her name on it. And although she loves his gift, she sees opportunity when there is one. One of the men at the track just happens to be wealthy self-made man that Rayna made sure she was introduced to. She may want to do this all on her own but that doesn’t she can’t find investors here and there.

Rayna also is making strides with the other remaining artist on her label. She introduced Scarlett to Liam hoping they can collaborate together but Liam isn’t really feeling the new girl. He was willing to open up when it was with Rayna. Now that she’s with Luke, he isn’t as cooperative as he normally is.

Will needs to learn boundaries. He allowed his mustache to temporarily move in with him and Will without ever once asking his roommate. What a way to put Will on the spot. Unfortunately, Layla doesn’t realize how much Gunnar is uncomfortable and kind of hounded him into helping her write her own songs. He agrees but he later on comes across as mean when he keeps pushing her to reveal her inner most feelings. It makes Layla changes her mind about getting help from him. She doesn’t want to if he’s going to act like that.

Since her scandal, Juliette needs to make amends. As a matter of fact her boss is insisting on it. Jeff wants her to make a formal apology at the Grand Ole Opry ceremony. He even made her rehearse it during practice. Juliette needs the public to love her again or she’ll no longer be useful to the record company. Both Maisey and Deacon don’t care what she might have or might not have done. They feel the only thing that is important is her music. Juliette thanks them for her support but she knows what she has to do.

Deacon was approached by his newest label to make an album. He’s always dreamed of that and yet he doesn’t want to make the one they feel he should do. The record company wants him to collaborate with all of his famous friends. They know an album like that would be gold and they don’t really care how much Deacon wants to make it on his own. So he understands why Juliette is bending under the pressure.

Before Juliette goes onstage, Brad Paisley takes a minute to talk to her. This isn’t just any showcase for her. She’s being inducted to one of country music’s highest honors. Brad reminds that she’ll always have this stage so it’s time to let some things go.

Surprisingly, Juliette takes his advice. She doesn’t open her song with an apology like she was told to do. She went up there and thanked everyone that was still supporting her and gave a screw you to anyone that thought her career was over. Then she sang her heart out. Jeff wasn’t pleased watching her ruin his plan but what was he going to do. Afterwards, Rayna told Juliette she was brave. It wasn’t the smartest thing to do but it sure was brave.

The same criticism Gunnar was giving Layla ended up being what Liam told Scarlett. He told her she wasn’t singing from the heart. Instead she was singing what she thought her audience would like and it was coming pony to him. He stole her little notebook. The one she wrote most her lyrics in and asked her about them. He said there was so much anger in there that she has yet to explore in the studio. Scarlett didn’t want touch on the subject though. She was afraid to express her real feelings towards her mother.

Once Scarlett opened up, Liam helped her to find what she needs to be singing about. Apparently her mother suffered from some kind of psychiatric condition. She was always swinging from one extreme emotion to another but no one wanted to lock her away. Scarlett needed to open up about her past. It was the only way that allowed her to move on.

Mr, Boone, the man Rayna was doing her best to butter up, told her he could help distribute her new album. She would have to put in a bid well over a year in advance before one of his stores could find the shelf space. Rayna hears him and she still set on changing his mind. She invites to listen to her sing one of her new songs. Prior to singing though, she announced when her new album was dropping to the crowd.

Jeff dropped Juliette from the recording company. He was too angry after her little stunt. Yet he shouldn’t have counted Juliette out. She reminded him that he dropped his two biggest artists in the last year and the only person he has left to headline was Layla. The very same girl that placed second place in a singing competition. So when Jeff heard Rayna’s launch date he immediately called his people and told them to drop all of the albums they have left on the day. He wants to make sure no one sees Rayna’s album much less buys it.

Will confronts Gunnar. He wanted to know why his friend was so hard on Layla. Gunnar explained he wasn’t. He simply wanted Layla to relax and she took it the wrong way but he did find something in Will’s relationship with Layla. Gunnar told him that he needs to stop lying about his sexuality. He doesn’t want to be around to see someone get hurt.

Teddy thinks Lamar killed his wife. He fears that Lamar might think he was the key witness in his case and had went to the prosecutors demanding answers. He wanted them to make sure Lamar was locked away for good but that was hard to do seeing as the real key witness did a runner. They eventually found Tandy hiding out in a motel room. And yet she still wasn’t going to play ball. Tandy doesn’t want to testify. She thinks her father will kill her if she did. Left without any other choice, Tandy torpedoes the prosecution’s case against her. She and her lawyer made them throw any and all evidence she gathered for them.

With the way Teddy is right now; he’s not going to like hearing Lamar go free!

Boone did change his mind. He’s willing to sell her album. It seems he got a whole bunch of free space after his stores started to remove Juliette’s CDs. Juliette and her manager are trying everything although they can’t change facts. No one wants her except… maybe Rayna. Rayna turned down Boone’s offer. She had to. She wasn’t going to help anyone with their witch hunt. Not even to save her own album.

Scarlett is creating a great album. However as Deacon points out – Liam is pushing her too hard. She’s staying up all night and taking Liam’s pills to keep her awake.

Will spoke to Layla. He didn’t call things off like he should have done. Rather he chose to be her friend and listen to why she’s having problems writing her own music. Layla explains that she’s used to pleasing everyone besides herself. It’s gotten to the point that she doesn’t know who she is anymore. Will knows an identity crisis when he sees one and it able to comfort Layla.

Feeling better, Layla returns to her lessons with Gunnar. She politely apologized and asked him to give her a second chance. Gunnar in return decides to help her.

Juliette found the one thing she didn’t want to live without. She went over to Avery’s and admitted her true feelings. She needs him and he wants to be there for her.

Lamar’s case fell apart and it almost looks like he’ll walk scot-free. That is until Teddy finds a way to get at him.