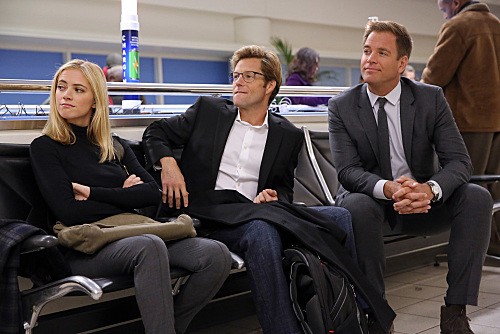 Tonight on CBS NCIS continues with an all new Tuesday November 25, season 12 episode 9 called, “Grounded,” and we have your weekly recap below. On tonight’s episode, DiNozzo [Michael Weatherly], Bishop and her husband, who are stuck at Dulles airport due to inclement weather, work an NCIS case involving an elevated terrorist threat to Northeast airports during the Thanksgiving travel period.

On the last episode, while the NCIS team investigated the cause of a hit and run accident that resulted in the death of a Petty Officer, Gibbs searched for a way to clear a Navy Hospital Corpsman, who had served two medical tours in Afghanistan, after she was indicted for illegally providing medical aid to the victims of the crash, even though the surviving victims swear by her life-saving techniques. Did you watch the last episode? If you missed it, we have a full and detailed recap right here for you.

On tonight’s episode as per the CBS synopsis, “while stuck at the Dulles airport due to inclement weather, DiNozzo, Bishop and her husband Jake work an NCIS case involving an elevated terrorist threat at Northeast airports during the Thanksgiving travel surge.”

Bishop’s husband Jake finally gotten the chance to meet her coworkers but unfortunately he missed out on meeting Tony because the other man had already left the office. So at first Bishop was disappointed. But then the most surprising happened. They ended up running into Tony at the airport.

Bishop and her husband were going to fly out to enjoy some warm weather over the holidays and Tony just happened to be at the airport, after bypassing security protocols, in order to wait for his dad’s plane to arrive. Yet something else occurred soon after Bishop made the introductions. She ran into another familiar face and she swore she knew the man from somewhere. Yet she couldn’t place the name with the face.

So she asked Tony for his opinion. And he was too caught up in his love life to actually be of help. It seems Tony has become jaded about relationships. He recently went on a vacation that turned out to have been planned for two.

Hence he’s a tad about his lack of love life.

Though Tony did come out of his funk after he got a phone call from Gibbs. Gibbs had wanted to warn him about a possible terrorist attack at the airport. They’re apparently searching for someone who threatened to attack over the holiday. So Tony was pushed into being on alert. And once he was he looked at the same man that kept making Bishop uncomfortable.

Bishop knew she recognized the suspect’s face but she felt like she made a mistake and a complete fool of herself in confronting him. Their “suspect” was an Air Marshall or so he claimed. And Bishop was worrying herself about whether or not she inadvertently had broken his cover.

However Tony wasn’t buying the Air Marshall’s story. So he called McGee and asked him to run their suspect name. And with a little help from Abby, the team figured out the man claiming to be an Air Marshall was in fact an imposter. He looked like Agent Beers but the facial markers weren’t all lining up.

And when they went to arrest their imposter, someone had already gotten to him first. So not only is there a dead imposter at the airport but his killer is on the loose and armed with Agent Beers’s gun!

McGee found the real Agent Beers murdered at a motel nearby. Someone had left behind the victim’s credit cards and cash meaning his impersonator wasn’t supposed to be playing his part for long. Then again he probably never suspected he was would be killed soon after completing his side of things.

The impersonator’s real name was Norman Dopps. He was a chameleon. A man for hire that was capable of changing his appearances on a whim. But someone choose to kill him rather than go through the trouble of paying him for carrying out his latest orders.

Norman’s job was to get a gun inside of the secured airport. And he did that but no one knows who has the gun now or who they planned on using it on.

The assassin (for that’s what they surely are) is running free at the airport and the victim could either be already at the airport or on one of flights coming in. So TSA tried to derail all flights. They felt they could draw out their culprit with time and patience. Though, as it turns out they don’t have the time they need to take thing slow. Homeland ended up overruling their decision and TSA was told they had to interrogate all passengers because three of the flights coming in had little to no fuel left to fly with.

So the culprit, in spite of the NCIS’s warning, was going to be forced to reveal themselves. All passengers were asked to get rescreened. And TSA was sadly too undermanned to take on such a project. Thus the only thing that could provide a safe outcome was for the team to find out who they’re intended victim was and work from there.

And what they found was that two Marshalls were bringing in an unnamed man on one of the flights that was being landed. They were providing an escort to a known murderer with ties in a notorious Colombian drug cartel. So they looked into the man’s associates and landed on the same man Tony had complimented earlier about the other man’s suit.

Tony hates it when travelers show up at the airport dressed in their pajamas or simply look slovenly. So a man in a suit had most definitely grabbed his notice.  And because of that – Tony was able to quickly find the same man before he could reach his target.

Tony found him and was forced to shoot to kill in order to protect everyone in the nearby vicinity, but at the end of the day he did save the victim and he also kept the TSA out of harm’s way. So while it wasn’t neat – he carried out a job well done.

And everyone was allowed to return to their original holiday plans.