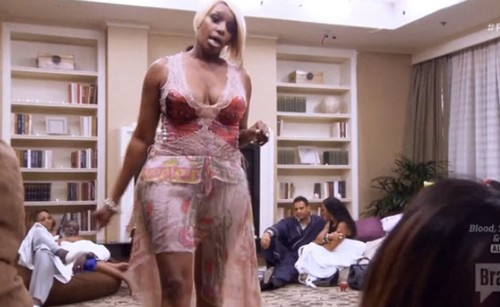 NeNe Leakes isn’t known for her lady-like behavior, but she took it one step further on the latest episode of Real Housewives of Atlanta, turning the show into WWE for women. NeNe and her former ‘friend’, Marlo Hampton, went at each other in a full-out brawl on the show, kicking and screaming at each other like demented hillbillies.

They were initially competing in a day of sports, with the housewives divided up into different teams. I have to say, bad BAD idea to do that. Really, why would you attempt to segregate the housewives even further? Oh wait, drama and reality television. Never mind.

Of course, the producers had to be expecting something like this to happen, and NeNe and Marlo didn’t disappoint. Marlo was reportedly upset at not being invited onto Cynthia Bailey‘s team [supposedly because Marlo and Kenya Moore are close, and Kenya and NeNe are fighting], and she decided to take that out on NeNe. In the video released from the episode, Marlo can be seen getting closer and closer to NeNe, and then shouting, “I’m gonna beat your butts.” NeNe then retorts back, “Get the f**k off me.”

NeNe then decided to throw a bottle at Marlo, which obviously caused the hysterics to descend to a while different level. Marlo then started throwing punches at NeNe, screaming at her, “B**ch, you’re stupid. You are insecure… Tell the whole ATL why you’re not talking to me? ’Cause I’m Kenya’s friend?”