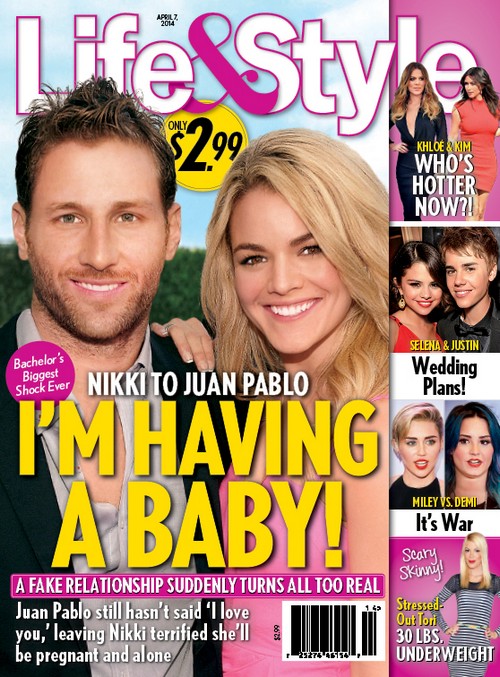 According to the latest cover issue from Life & Style Magazine, Nikki Ferrell is pregnant and afraid of getting abandoned by Juan Pablo. Can you blame the poor girl? Juan Pablo’s the biggest douchebag Bachelor ever to grace our screens, and that’s saying a lot considering some of the Bachelors we’ve had.

The report claims that Nikki has told Juan that she’s pregnant, as a ‘fake relationship turns all too real‘. Apparently, Juan still hasn’t told Nikki that he loves her, and now Nikki’s ‘terrified‘ that he’ll abandon her as soon as he finds out the truth.

IF Nikki’s actually pregnant, and that’s a big, big IF, I can actually see everything playing out that way. We already know Juan Pablo’s a selfish ass, and he already has one kid that he’s taking care of – will he be willing to take care of another kid, especially with his fake girlfriend? This will seriously cut into his flirtations and flings with other women, so I don’t know if he’d be too open to it.

Another report from Life & Style cover focuses on the alleged ‘war’ between Demi Lovato and Miley Cyrus, which is a total UGH. Seriously, isn’t everyone sick of Demi and Miley by now?

There’s also a story on Selena Gomez‘s alleged wedding plans with Justin Bieber, which if true, will probably lead to a meltdown from the media and Beliebers everywhere.

Finally, Tori Spelling has started worrying those close to her with her drastic weight loss, especially since she’s now allegedly 30 pounds underweight. Yikes, talk about malnourished.

What do you guys think about this week’s Life & Style cover stories? Let us know your thoughts in the comments below.